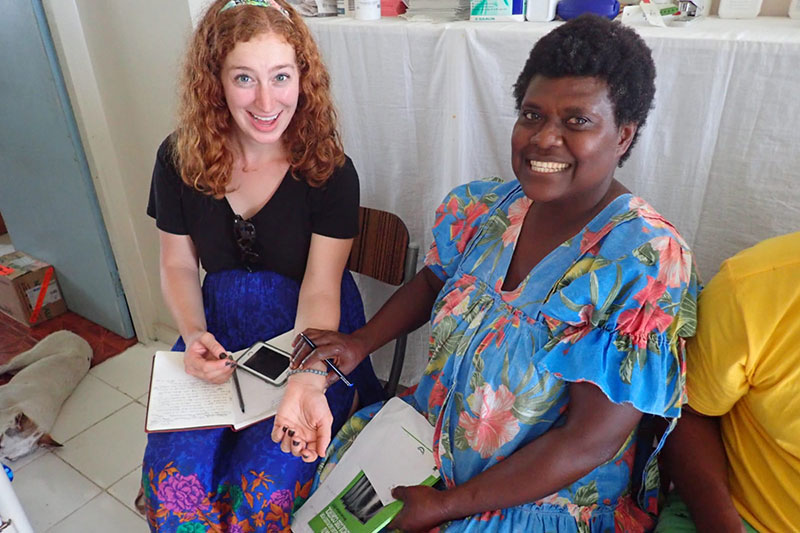 Alina Meador, left, graduated from Tulane University with a degree in public health and Latin American studies in 2016, and is serving as a health volunteer in Vanuatu. (Photo provided by Peace Corps)

Peace Corps announced on Wednesday that Tulane University ranked No. 3 among medium-size schools on the agency’s list of top volunteer-producing colleges and universities in 2019. Tulane also ranked No. 1 among schools that produce volunteers from graduate programs. This is the eighth consecutive year that students from Tulane’s graduate programs helped place the university in the top 5. There are 44 Tulanians currently volunteering in countries around the world.

Tulane has moved steadily up in rank since its first ranking in 2010 at No. 25. Since the Peace Corps’ founding in 1961, nearly 600 alumni from Tulane University have served abroad as volunteers.

“We have seen time and again that the colleges and universities that produce the most Peace Corps volunteers focus on cultivating global citizens in addition to promoting scholarship,” said Peace Corps Director Jody Olsen. “I am proud that so many graduates of these esteemed institutions leverage their educations to make the world a better place. They bring critical skills to communities around the world and gain hands-on, life-changing experience along the way.”

Alina Meador graduated from Tulane University with a degree in public health and Latin American studies in 2016, and is serving as a health volunteer in Vanuatu. Meador works with the Ministry of Health to send qualified nurses to local health facilities. She leads workshops educating community members and children about relevant health matters and preventing malaria and other diseases. She is also part of a Peace Corps–wide organization that helps to empower women, teaching gender equality, domestic violence prevention and other gender-based violence awareness across Vanuatu. She credits the public health knowledge and training from Tulane that is now the foundation of her work. “Tulane incorporates a ‘service learning’ component into their core curriculum. This instills a love of service for others into every Tulanian, past and present,” Meador said.

The Peace Corps ranks its top volunteer-producing colleges and universities annually according to the size of the student body. View the complete 2019 rankings of the top 25 schools in each category here and find an interactive map that shows where alumni from each college and university are serving here.

*Rankings are calculated based on fiscal year 2018 data as of September 30, 2018, as self-reported by Peace Corps volunteers.