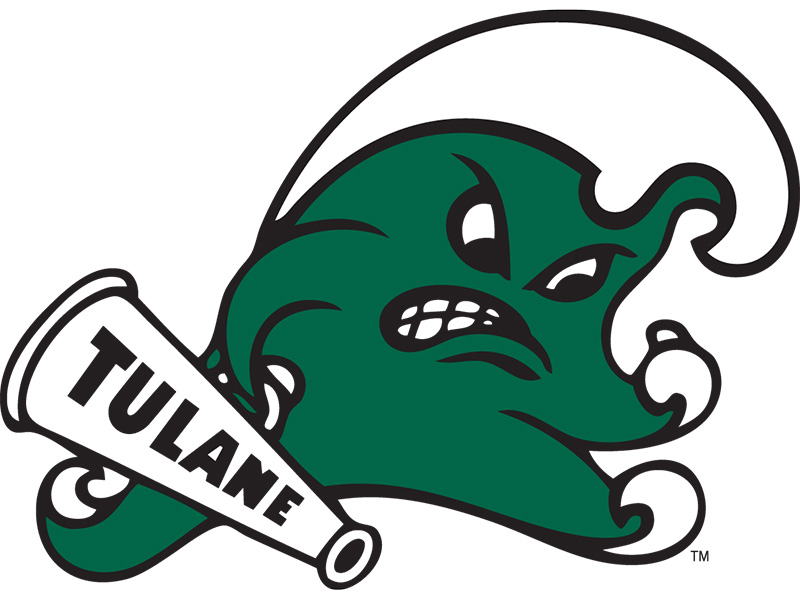 The angry-looking wave or “Angry Wave” was adopted in 1964. (Photo from Tulane Athletics)

More than half a century ago, the “Angry Wave” was born and became one of the most visible marks of Tulane Athletics.  Together for the first time with the “T-Wave” the Green Wave now boasts one of the most unique sets of logos in collegiate athletics.

When Rix Yard became the director of athletics in 1963, he felt Tulane needed a more virile symbol for its teams. Working with Eldon Endacott, the manager of the Tulane bookstore, Yard arranged for a new mascot to be created. Several sketches were submitted by Art Evans, art director for Angelus-Pacific, Co., in Fullerton, California.

More than half a century ago, the “Angry Wave” was born and became one of the most visible marks of Tulane Athletics.

The angry-looking wave or “Angry Wave” was adopted in 1964 and became the mainstay logo of the athletic department for 34 years. During that time various mascots depicting a Green Wave was used, primarily Gumby and eventually the present mascot, Riptide.

The “Angry Wave” remained in existence until a new logo consisting of a white block “T” with green and blue waves crossing its center was adopted in 1986 as the primary symbol for official uniforms, though the “Angry Wave” cartoon continued to be used in licensed products.  It became the primary athletic symbol and adorned Tulane uniforms through 1997.

On Aug. 19, 1998, a new set of athletic logos was unveiled to better identify and represent Tulane athletic teams. They were the “Wave” and the “Wordmark.”

Although the “Angry Wave” has not been a part of the official Green Wave lineup of marks for the past 19 years, its popularity has not diminished as it has been very successful over the years commercially.

Fans can purchase official “Angry Wave” gear online or by visiting the Tulane Team Store inside the James W. Wilson Jr. Center, or at the Tulane Bookstore in the Lavin-Bernick Center for University Life.