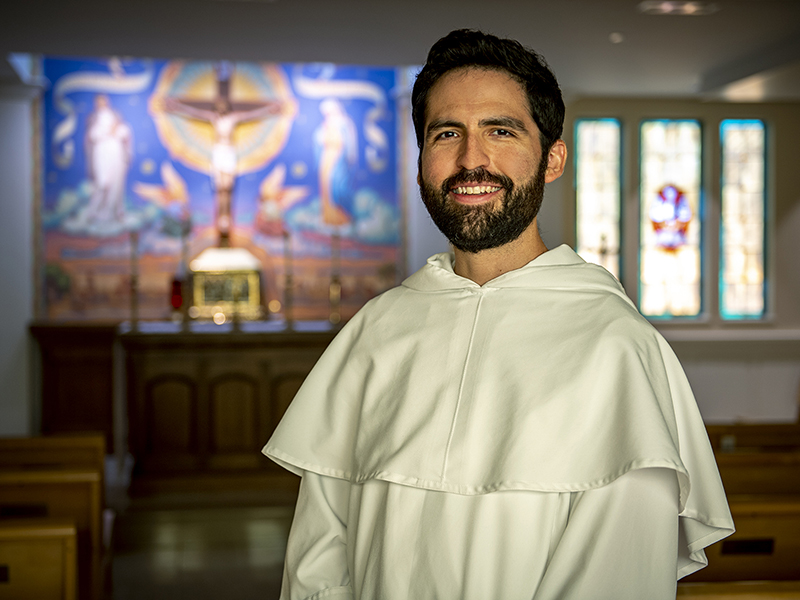 Rev. Thomas More Barba took over the leadership role as chaplain and director of Tulane Catholic Center in July. (Photo by Paula Burch-Celentano)

Only three months into his new position as chaplain and director of Tulane Catholic Center, Rev. Thomas More Barba is already seeking to grow with the Tulane students in his congregation.

Barba has an appreciation for Tulane students, whom he finds to be very intellectually driven and always striving to achieve. He is also inspired by their sense of commitment and desire to serve their community.

“I want students to ask themselves – what is the best way to live? I want them to take seriously the hunger in their heart and the hunger in their mind – that striving for the best. And I want to offer them what I believe is a completion of that perfection, to help them to grow and answer that desire for excellence, for what is truly great.”

Barba has ideas for expanding the offerings at Tulane Catholic and hopes to start a monthly evening lecture series with guest speakers that will invite students to engross themselves in learning and exploration. He also plans to continue the work begun by former chaplain Rev. Thomas Schaefgen, but to approach it using his own personal insight.

“It really feels right being here. I want to build on and continue the work that he has done. As I get a feel for how things have been done and why they've been done, I'll have a sense of how I want that to continue to grow. What I hope to bring is a connection with what the students are already immersed in at Tulane.”

Due to his deep interest in intellectual pursuits, Tulane is an ideal new post for Barba, who grew up in El Paso, Texas, the oldest of three sons in a Catholic family, where the church was always very much a part of his life. Barba felt the calling to the priesthood at an extraordinarily young age. When he was 8 years old, he imagined himself celebrating Mass at the altar of his family’s church and described the pull like “a gentle magnet.”

He went on to study theology and philosophy as an undergraduate at the University of Dallas and was then placed there for his first assignment after his ordination. He remembers being immediately drawn to the Dominican order due to its focus on study as an integral part of spirituality.

“It's very much a part of our preparation for preaching and for ministry,” he said. “I like to joke that we're an order of nerds.”