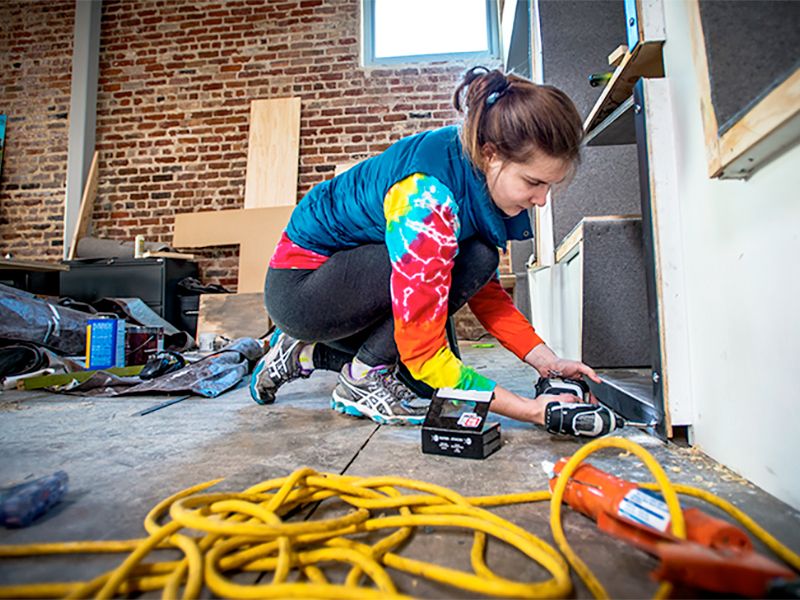 Tulane City Center has a place to call its own, and faculty, staff and students could not be more pleased with the finished product, said Maggie Hansen, interim director of Tulane City Center.

Located at 1725 Baronne St., in the heart of Central City, Tulane City Center celebrated the opening of its new headquarters last month with a rousing affair featuring music by Shamarr Allen and food from neighbor Café Reconcile.

At 7,000 square feet, the building features ample workspace for staff, fellows and interns as well as courses such as Engage Design Build studios. In addition, the building houses a fully outfitted workshop for fabrication and staging of built projects.

"Tulane City Center is committed to this neighborhood."

“This is our new community-based home. It makes us a lot more accessible to our partners,” Hansen said.

An outreach program of the Tulane University School of Architecture, Tulane City Center has been involved in designing and building of dozens of neighborhood revitalization projects, including playgrounds, healthcare facilities, arts centers and urban farms.

The program first moved to Central City in 2013 when it opened a temporary space on nearby Oretha Castle Haley Boulevard. Not long after, Tulane City Center teamed up with Gulf Coast Housing Partnerships to begin construction on the Baronne Street building.

The building was once part of the sprawling Kauffman"s department store, one of several retail outlets that populated the Dryades shopping corridor from the mid-19th century. As a vital business district for New Orleans' African-American and Jewish communities, the Dryades corridor thrived for over a century and was a key site during the civil rights era.

Today, the neighborhood is in the midst of a renaissance, with Tulane City Center an enthusiastic stakeholder.

“With the renovation of a historic building into a point of entry for Tulane into the community and the community into the university, Tulane City Center is committed to this neighborhood,” Hansen said.