The Tulane University School of Medicine, moving to “change the face of pediatric cardiac care at Tulane, in Louisiana and the Gulf Coast region,” recently invested Dr. Thomas Yeh Jr. as the first Elias S. Hanna, MD, Cardiovascular Foundation Chair in Cardiovascular Surgery. Hanna, a world-renowned cardiovascular surgeon and Tulane alumnus, gave $1.25 million to the School of Medicine to establish the chair and enhance the activities of an outstanding faculty member in the Department of Surgery. 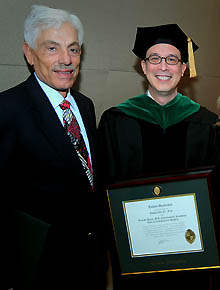 “This is a time of tremendous change,” Yeh remarked upon receiving the honor on Dec. 9 at a ceremony in the Gwynn Collins Akin Bowers Auditorium on the downtown campus. “We intend to change the face of pediatric cardiac care at Tulane, in Louisiana and the Gulf Coast region by providing the most state-of-the-art team under the unified umbrella of the Tulane Pediatric Heart Center. We are literally handpicking seasoned faculty from around the world.”

Yeh, an alumnus of Duke University, Johns Hopkins University and the Medical College of Virginia, joined the Tulane faculty in 2007 after distinguishing himself as a pediatric cardiothoracic surgeon at the Children's Medical Center in Dallas. He currently is the director of the Tulane Pediatric Heart Center, a multidisciplinary group of physicians dedicated to the care of heart defects in children, and the Chest Wall Center, which utilizes minimally invasive approaches to correct chest wall defects in children.

Tulane President Scott Cowen hailed Yeh as “a tireless learner who has applied his vast knowledge to saving countless lives.”

Calling Hanna “a giant,” Cowen said, “His determination to ensure that the School of Medicine remains at the forefront of the very best cardiac care led him to make an exceptional gift that will sustain generations of top surgeons at Tulane.”

Linda Wilson, who serves with Hanna on the Board of Tulane, echoed Cowen's sentiments: “Elias enrolled at the Tulane medical school as a work-study student, and has really never stopped working on Tulane's behalf,” she said. “Now he gives not just his skill as a surgeon to the world, but also provides the means for others to follow in his distinguished footsteps.”

Hanna is the founder and president of the Elias S. Hanna, MD, Cardiovascular Foundation, a charitable organization that assists countries that do not have the capabilities to perform open-heart surgery. It is through this foundation that Hanna contributed $1.25 million to Tulane, a gift that received matching funds from the State of Louisiana Board of Regents, and earned him a place in the Paul Tulane Society, Tulane's most prestigious donor organization.

Yeh will use his new position as holder of the Hanna Chair to bring the Tulane Pediatric Heart Center to the forefront of treating and preventing heart disease in children. He concluded his remarks at the ceremony by outlining his vision, which includes imminent construction of the most advanced pediatric hybrid catheterization laboratory and surgical suite in the country, new telemedicine links with referring centers and a helipad for the transfer of critically ill children.

“Our rapidly growing team of skilled professionals will be our longest and strongest suit,” Yeh explained, “but we will further distinguish Tulane with the formation of a state-of-the-art Pediatric Heart Center, not only to take the best possible care of patients today, but also to ensure their care tomorrow. Dr. Hanna's gift, quite simply, makes this mission possible.”

Michael Ramos is a writer in the Office of Development Research and Writing.