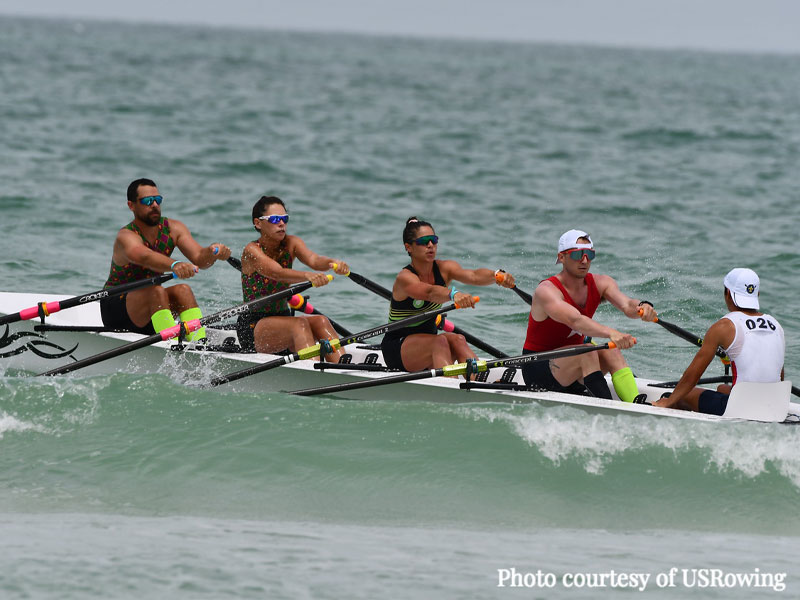 Tulane University School of Architecture faculty member John Huppi is part of a rowing team that recently earned a spot to compete in the FISA World Rowing Beach Sprint Finals representing the United States in Oeiras, Portugal, in the fall.

John Huppi, assistant director of the real estate program, is part of a five-person sculling crew, which includes his wife, Hannah. The two met while students at Tulane and were part of Tulane’s Club Sports Rowing Team. John Huppi served as president of the Tulane Association of Club Sports and is now the president of New Orleans Rowing Club.

“We learned to row at Tulane and have been rowing ever since,” he said.

The Beach Sprints is a coastal rowing event in which the crew starts the competition on the beach and sprints 50 meters to the water. The crew then rows for 250 meters to a turn-around buoy, rows 250 meters back to the beach, and then sprints again for 50 meters across the finish line.

The crew won the trials for their boat class with a time of 2 minutes, 32.7 seconds.

Their boat class, Mixed C4x+, means that the crew consists of two men and two women, with each rower in control of two oars and competing on a coastal shell with a coxswain. A coxswain does not row but steers the fin and rudder of the boat and serves as the “eyes and ears” for the crew, Huppi said. They are constantly communicating the location of the buoys, the team’s tactics and the position of the other teams. The crew’s coxswain is Bennett Rossell, a student at Stetson University, who is also coxswain on that university’s men’s rowing team.

A coastal shell competition is considerably different from flatwater rowing in that there are several variables at play when rowing in the ocean, Huppi noted. “You have swells, wave breaks, wind, tidal flows, and probably the most dramatic of all those are the wave breaks because the boats can really launch off waves.”

The crew uses Lake Pontchartrain to practice and utilizes the beach near the Seabrook Bridge near the Inner Harbor Navigational Canal, or commonly referred to as the Industrial Canal. They also go on training trips to Florida. (For flatwater training, the team uses Bayou St. John).

Of winning the USRowing Beach Sprint Trials, Huppi said he felt excited and described it as “surreal.” In addition to being exceptional rowing athletes, Huppi and his wife perform the balancing act of working full-time and parenting a 20-month-old daughter.

“It’s all very unusual. Most of these rowers that we row against and row with are full-time athletes. So, we’re incredibly fortunate to be healthy enough and physically fit enough to have been given this opportunity, even just to make it to the start line,” he said. “Just overcoming all those barriers, and to push through and qualify is just incredible.”

Olbrys and Cavallo also welcomed the win after not qualifying for the upcoming Olympics.

Huppi said that training can be intense and not every day is perfect, but they do their best and “take what the day gives us.”

Looking ahead to the FISA World Rowing Beach Sprint Finals, which will be held Sept. 24-26, Huppi said, “It’s not just a test of physical excellence, but it’s also a test of adaptability and problem solving because the conditions change with every wave.”

The competition will feature teams from 16 countries, and the top eight teams will advance to knockout-style rounds to make it to the final. Huppi said that this is the first time USRowing will have a team competing in the international coastal rowing competition.

Rowing may seem like an unusual hobby, especially in the world of academia, but Huppi said that the School of Architecture provides faculty with strong support for engaging in pursuits outside the classroom.

“I think it really embodies what we’re trying to do at Tulane with our graduates: showing Tulane students that you can be a leader in the field, but you can also be social, you can have fun and have interests and hobbies. And balancing those things is going to make you better in the workplace and better in your careers at the end of the day.” 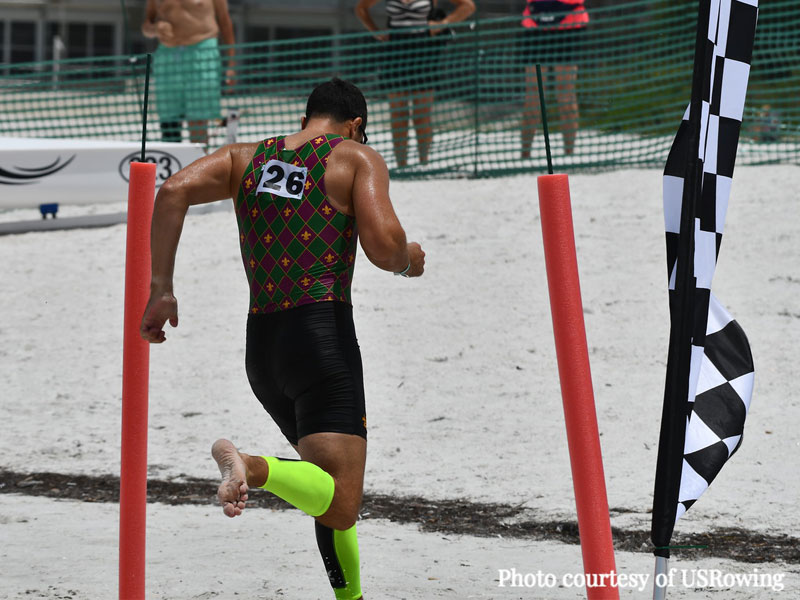 John Huppi competing in USRowing’s first-ever Beach Sprint Trials in Sarasota, Florida. The competition calls for the crew to sprint 50 meters on the beach to the water, row for 250 meters to a turn-around buoy, row 250 meters back to the beach, and then sprint again for 50 meters across the finish line. (Photo courtesy USRowing) 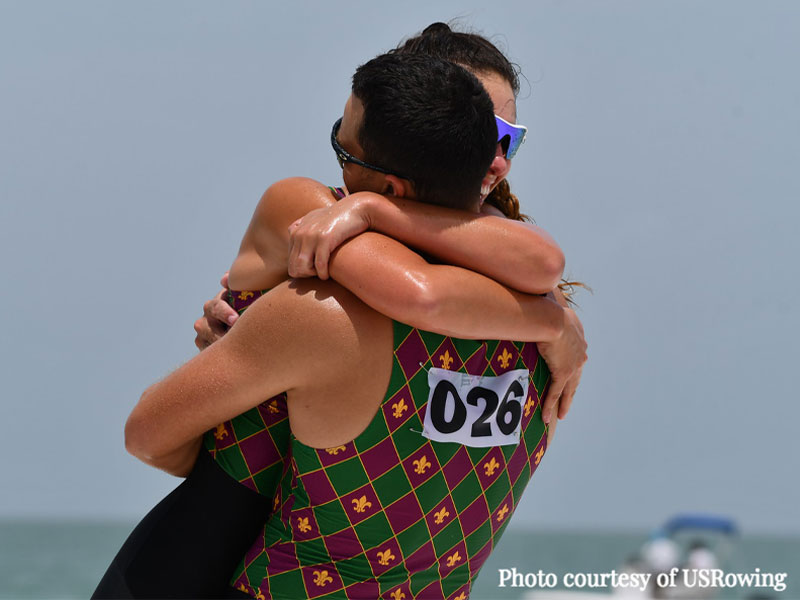 Hannah and John Huppi embrace after competing in the Beach Sprint Trials. The crew won the trials for their boat class with a time of 2 minutes, 32.7 seconds. (Photo courtesy USRowing)