Tulane Honored for Service to Community

The Corporation for National and Community Service has honored Tulane University for exemplary efforts and service to America's communities with a place on the President's Higher Education Community Service Honor Roll. 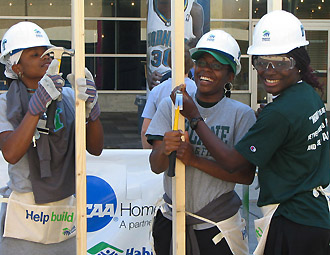 Student athletes work with Habitat for Humanity to build homes in the Crescent City. Tulane is the only major research university that has public service as an integral part of its curriculum. (Photo by Paula Burch-Celentano)

Launched in 2006, the Community Service Honor Roll is the highest federal recognition a school can achieve for its commitment to service learning and civic engagement. Honorees for the award were chosen based on a series of selection factors including scope and innovation of service projects, percentage of student participation in service activities, incentives for service and the extent to which the school offers academic service-learning courses.

Tulane University President Scott Cowen said the university was honored by the recognition.

“Integrating public service into the core curriculum after Hurricane Katrina was one of the most popular and rewarding decisions we have ever made,” Cowen said. “Tulane is the only major research university in the country that has public service as an integral part of its curriculum. This is one of the reasons we are seeing a record number of students' applications. Today's students want education that makes a difference.”

The Center for Public Service at Tulane University hosts a wide array of community engagement programs and administers the university's public-service graduation requirement for undergraduate students.

This semester, Tulane is offering more than 110 courses that include a service-learning component, requiring students to work with community agencies to perform duties that tie into the academic structure of each course.

Developing this group of service-learning courses “was truly a team effort,” said Vincent Ilustre, executive director of the center, “from the faculty members who offer the courses and have taken to service learning as a pedagogy, our community partners, the students who have shown such enthusiasm for helping the community, my colleagues at the center and the administration.”

Through the center, Tulane students, faculty and staff employ the knowledge and expertise of the university to address social challenges in a region that is rebuilding from the nation's worst natural disaster.

“We are fulfilling our promise to our students  who have chosen to come to Tulane to participate in the rebuilding of our city  and to our city,” Ilustre said.