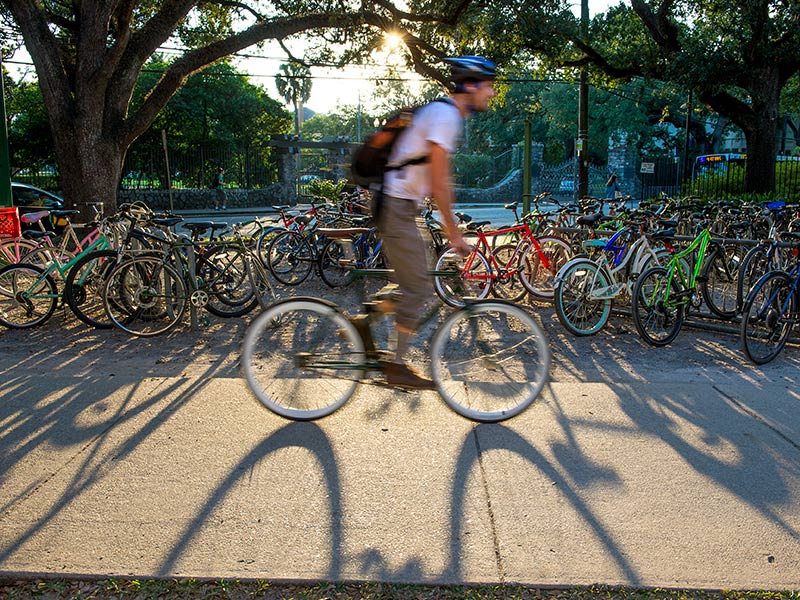 Tulane University has joined the New Orleans Complete Streets Coalition, a group of organizations and businesses supporting the city’s Complete Streets initiatives. “Complete Streets” are streets designed and built to accommodate all users — not just drivers, but also bicyclists, pedestrians and transit users — including children, senior citizens and people living with disabilities.

Moving New Orleans Bikes, the most notable current Complete Streets initiative, is the city’s effort to improve bike safety and create a citywide bikeway network. The initiative began with extensive community meetings in 2019, and many neighborhoods now have projects completed or underway. Protected bike lanes are the most distinctive feature of these projects, which also include Americans with Disabilities Act – accessible ramps, new sidewalks, bus islands and traffic-calming installations.

Projects will begin soon on Baronne Street, O’Keefe Avenue and Howard Avenue, giving Tulane students, staff and faculty who study, work and live on the downtown Health Sciences campus protected bike lanes through the Central Business District. Future plans include bikeways on other downtown streets as noted in the city’s Bikeway Blueprint.

“Tulanians depend on Complete Streets in many ways,” said Liz Davey, director of the Office of Sustainability and Tulane’s representative to the coalition. Tulane bike commuters, recreational riders and competitive cyclists won the top organization category in the Love to Ride New Orleans challenge in April, with over 200 Tulanians reporting 156,653 miles cycled that month. Tulane University Libraries staff and graduate students led the university’s winning effort.

A number of Tulanians have already contributed to the New Orleans Complete Streets Coalition as volunteers and participants. Zina Harris, director of administrative services at the A. B. Freeman School of Business, leads the recreational cycling group Sistahs on Wheels. The group received a grant from the coalition to organize a Fellowship Sunday Family Bike Ride last May. About 100 riders left from Harris’ church in Central City after Sunday service. “They really want to get the word out about bike safety and the new bike lanes,” she said about the coalition, “and church is a great place to start.”

Harris and Sistahs on Wheels also joined last month’s Krewe of BOO! parade, riding low-rider bikes lit up with lights in-between floats and marching groups. “There’s something magical about coming together on bicycles as a group to socialize,” Harris said about the rides. “Once you’re on your bicycle, all your cares are left behind.”

Bike Easy, another member of the New Orleans Complete Streets Coalition, will offer a free Zoom workshop on Biking after Dark on Thursday, Nov. 18, from 6 -7 p.m. to help cyclists safely adjust to the shorter winter days.

A passion for music and building community is key to success for four notable Tulanians
Tulane launches Student Veterans of America chapter
Wave ’21 brings Tulanians near and far back to campus for homecoming
Meet us at the cemetery gates
Tulane scholars honored at first Research, Scholarship and Artistic Achievement Awards ceremony