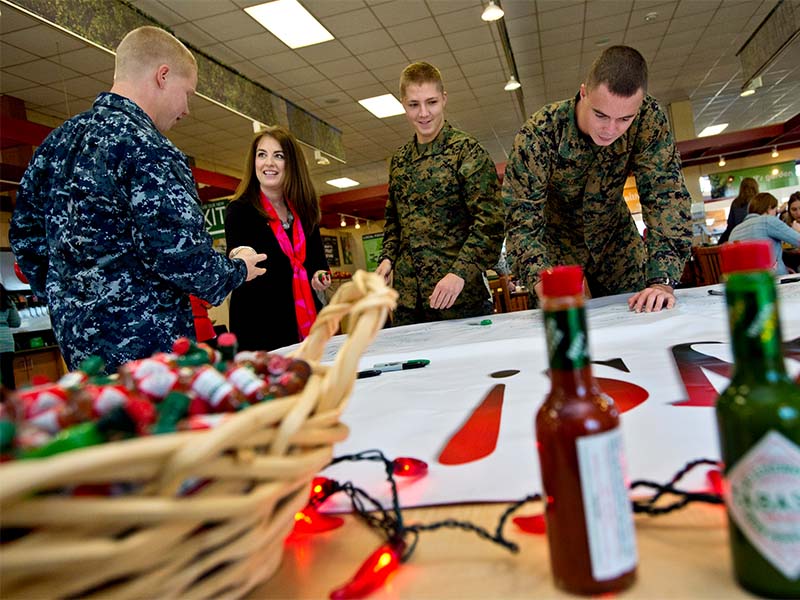 Tulane has launched a Student Veterans of America chapter, which is made possible through a $100,000 gift from Tulane alumnus Alex Hernandez and his wife, Megan. (Photo by Paula Burch-Celentano)

Just ahead of Veterans Day 2021, Tulane University announced a new means of support for students with a military background through the introduction of the Tulane Student Veterans of America (Tulane SVA) chapter.

During a celebration announcing the new chapter, Tulane President Michael Fitts said he’s hopeful that veteran students will find a renewed sense of community and belonging on campus.

“You are an example of pride for all of us at Tulane University and I hope that your passion flows over to the rest of Tulane,” said Fitts during the launch celebration held Nov. 9 on the uptown campus. “You are Tulane — a Green Wave of service and leadership that stretches across the globe.”

The celebration was hosted by the Tulane School of Professional Advancement (SoPA) and reached overflow capacity in its attendance. The event attracted alumni, members of Tulane’s ROTC, current active-duty and veteran students, and a host of faculty and staff supporters from across the university.

The Tulane SVA chapter is made possible through a $100,000 gift from Tulane alumnus Alex Hernandez and his wife, Megan.

“The student leaders of this organization are passionate about their mission of creating a space for veterans to come together at Tulane,” said Duitch. “I hope they all see, just looking around this event, how much support they have from Tulane administration, faculty and fellow members of the military on campus.”

While Tulane student veterans can be found in many schools across campus, Tulane SoPA is composed of 10 percent veteran and active-duty military students thanks to its applied programs in fields like cybersecurity, emergency management, homeland security studies and information technology.

Tulane SoPA’s online bachelor’s degrees, master’s degree and graduate certificate programs also make it possible for students to maintain their enrollment even when deployed or reassigned.

“This demonstrates Tulane’s commitment to reaching out to veterans and providing educational opportunities for them,” said Tulane ROTC cadet Ethan Sirhal, who attended the chapter launch. “I am in a unique position because I am getting my education first, but it can be difficult to come out of the military and acclimate to the civilian world and to higher education.”

Tulane SVA Vice President Xavier Calfee shared his story of serving as a U.S. Marine and then enrolling in Tulane SoPA, where he is working toward a graduate degree in cybersecurity. He encouraged student veterans in the audience — and those watching via livestream — to join the new organization.

“We are going to do great things,” said Calfee. “At Tulane you will find support. You will build life-long relationships, and you will share your invaluable experience with other fellow veterans.”

Ryan Randolph, an active-duty member of the U.S. Air Force and a Tulane SoPA student, serves as the organization’s first president. To thank Alex Hernandez for his generous donation to Tulane veterans, Randolph presented Hernandez with a Tulane SVA challenge coin, a military tradition that represents comradery and respect.

“I owe a lot of credit to what I achieved in life to my days in Navy ROTC, to my time in the military and to my time at Tulane,” said Hernandez. “One of the things I really get excited about is not just the students getting involved, but also seeing faculty get together, support the students and help provide mentorship.”

Membership is open to all Tulane students who are active-duty, veteran, and military affiliates. Anyone interested in joining Tulane SVA should fill out this interest form.