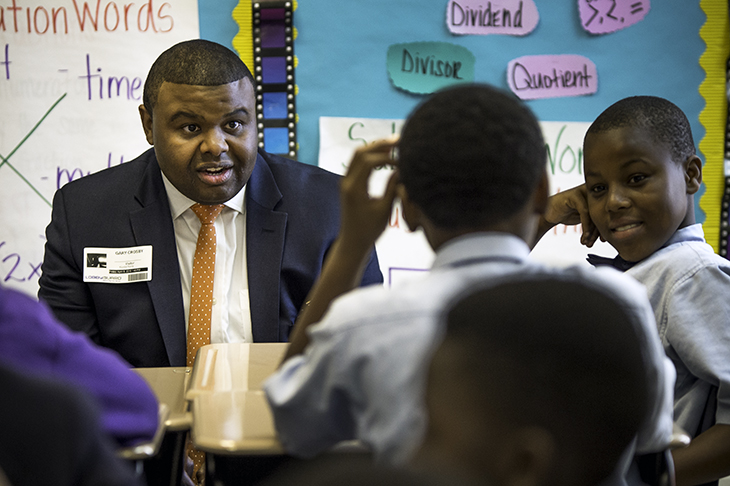 One of the biggest challenges facing minority students from low-income communities is lack of exposure to positive role models.

That was the main reason Krystal Hardy Allen, principal at New Orleans’ Sylvanie Williams College Prep Charter School, and I collaborated on bringing African-American and Latino students from Tulane Law School to inform and inspire sixth-graders about the possibilities for their future.

We led about 40 eager middle-schoolers from two classes in small-group discussions on Friday (April 8), sharing with them our diverse experiences and explaining the mechanics of applying to and attending law school.

I shared my experience teaching social studies to middle and high school students in New Orleans before I left for graduate school at the London School of Economics. The students were fascinated to hear that I spent the summer of 2010 as a White House intern.

“Wow! You worked for President Obama?” one student asked excitedly. I told them that a law degree could one day lead them to the presidency.

“President Barack Obama and President Bill Clinton both attended law school before their careers in public service,” I continued, before sharing that it was through teaching and working at the White House that I became inspired to pursue a legal career.

Other Tulane law students described their paths to law school.

First-year law student Charles Phipps was a track and field athlete as an undergraduate. He hopes to pursue a career in sports law.

Second-year law student Monique Arrington applied to law school after seeing too many people from her neighborhood going into the criminal justice system without adequate legal representation.

At the end of the small-group discussions, the sixth-graders were asked to share what they learned. Based on their responses, I know we made a huge impact.

Tulane law student Gary Crosby graduates in May and is set to start work as an associate at Milbank, Tweed, Hadley & McCloy in New York in the fall.

Mudbugs on the menu
Community activists have to be persistent
Musicians record song for cancer awareness
French Quarter Fest dos and don’ts
Photojournalist presents the good, bad, ugly and beautiful of New Orleans