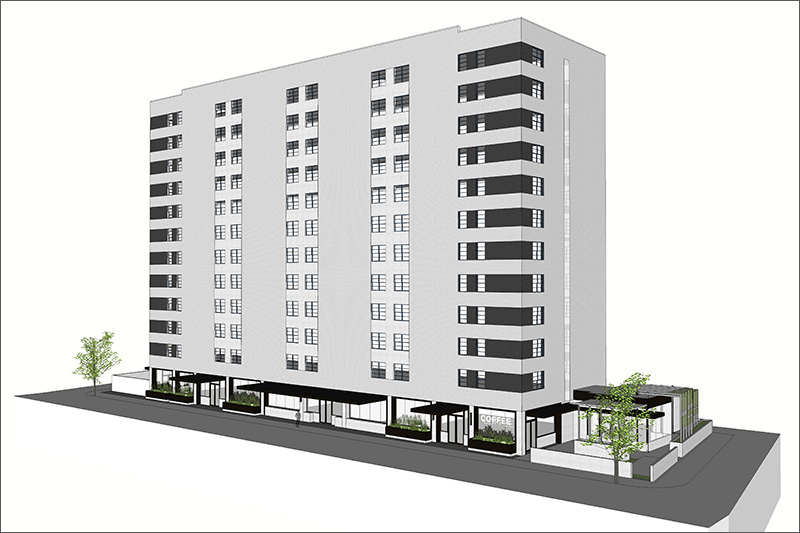 An architectural rendering of the renovated building (the former Warwick Hotel), located at 1315 Gravier St., which will include 154 apartments for graduate students, researchers, physicians, faculty and other affiliates of Tulane's expanding downtown campus. The project will also add ground floor retail space and dining options.

Tulane University has signed a long-term lease with the owners of the former Warwick Hotel, a 12-story building located at 1315 Gravier St., adjacent to Tulane University School of Medicine. The university plans to fill 154 apartments of the renovated building with graduate students, researchers, physicians, faculty and other affiliates of its expanding downtown campus.

The project will also add ground floor retail space, including a full‐service restaurant, coffee shop, grab-and-go food options, patio space and lounge seating. Renovation of the long-dormant building is slated to begin this month and completed no later than August 2021.

Redevelopment of the Warwick, which was built in 1952 but has been vacant since shortly after Hurricane Katrina, is part of Tulane’s overall strategy to expand its campus downtown, where it already occupies 17 buildings. The university also plans to be the anchor tenant in the redevelopment of the Charity Hospital building, filling more than 350,000 square feet of the one-million-square-foot structure with laboratories, classrooms, offices and more.

“The Warwick and Charity projects are prime opportunities to exponentially expand the university’s size and research mission, while also bolstering the creation of a robust research and commercialization ecosystem in the heart of the city,” Tulane President Mike Fitts said.

“Cities everywhere have been renewed and transformed by local universities, especially those located near their downtowns. This is Tulane and New Orleans’ shared future.”

As a model for such success, Fitts points to Nashville, Pittsburgh, Columbus, Ohio, and other cities that have been revitalized through the power of their local universities.

Both the Warwick and Charity redevelopments will place a sizable portion of Tulane’s research enterprise in close proximity to the city’s burgeoning Innovation District, increasing the likelihood that university discoveries and breakthroughs will find their way to the market. With the Warwick site, Tulane’s downtown campus will also be physically connected to vital civic assets such as Duncan Plaza and nearby City Hall, as well as the main branch of the New Orleans Public Library.

Having more Tulane students, scientists, faculty and over half of its staff downtown also promises to grow a neighborhood of retail shops, entertainment venues and ancillary businesses throughout the area.

“This is the first of many improvements we expect to occur in the Spirit of Charity Innovation District.  This particular project will not only work to aggregate more talented Tulane researchers, students, and professionals in the Charity District, but we expect this project to enliven a property that has been vacant for well over a decade.  We also expect this property to trigger an improvement in the surrounding street experience, as well as provide a catalyst for area business growth,” said Tulane Senior Vice President, Chief Operating Officer and Treasurer Patrick Norton.

“Tulane’s expansion into downtown New Orleans is one of the most exciting and potentially impactful developments of our generation for both Tulane and New Orleans,” said Michael Hecht, president and CEO of Greater New Orleans, Inc. “With the addition of the Warwick, Tulane is taking a significant step towards integrating with the fabric of downtown New Orleans. The result will be a revitalized urban core that becomes a nexus for research, teaching, and overall economic development.  This will elevate both Tulane and New Orleans on the national and global stage.”

Andy Kopplin, president and CEO of the Greater New Orleans Foundation and chairman of the BioDistrict New Orleans, highlighted the role a redeveloped Warwick Hotel will play within the Spirit of Charity Innovation District, the neighborhood surrounding Charity Hospital. The Foundation, the city and other partners are working to revitalize the district as an economic engine that will produce jobs in health care, biomedical research and other high-tech industries while also creating a walkable, residential and retail neighborhood.

“Tulane’s decision to dramatically increase its research presence downtown is exactly the kind of investment the Greater New Orleans Foundation hoped to inspire when we undertook our strategic planning process to create the Spirit of Charity Innovation District two years ago,” Kopplin said. “We have the ability to create a place that can attract thousands of good jobs and be known for equitable and inclusive development, and Tulane’s investments and commitment to those goals are a huge catalyst that will help bring that vision to life.”

New Orleans Redevelopment Fund (NORF) is the developer of the project, which is part of NORF’s new Qualified Opportunity Zone Fund, NORF 3. Tulane alumni Alex Hernandez and Mike Niemtzow founded NORF and know 1315 Gravier to be a perfect fit for Tulane and the city.

“We’re thrilled to partner with Tulane as it executes on its bold vision for downtown. Further, as a fellow New Orleanian, I am incredibly excited for the positive impact this development brings to the neighborhood and Duncan Plaza. Despite the challenges and complexity of this project, we were able to utilize our unique expertise in Qualified Opportunity Zones and Historic Tax Credits to make this an attractive project.,” said NORF’s Development Director Cullan Maumus.

Hernandez Consulting & Construction is the general contractor on the project. Albert Architecure & SCNZ are the architects of record.