Call it the thrill of victory  a broad smile flashed across Rick Dickson's face as he donned a black “Final Four” baseball cap. The Tulane athletics director represented the university in leading a broad-based coalition of city leaders to bring the 2012 NCAA Men's Basketball Final Four home to New Orleans. 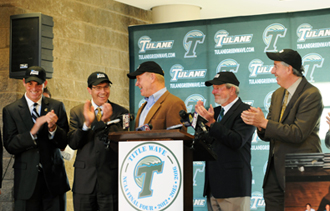 The much-awaited decision came down on Wednesday (Nov. 19) from the NCAA, awarding the 2012 Final Four to the Crescent City after more than a year and a half of work by Dickson, a group of determined Tulane staff members and a top-level Local Organizing Committee.

Tulane, the host school for the NCAA event, celebrated the victory with a late-afternoon press conference in the Wilson Center as news photographers and film crews recorded the good news.

Ten hopeful cities vied for the championship game in years 2012â“2016, but none worked harder than New Orleans to win the right of being a host city.

Support from Gov. Bobby Jindal, Tulane President Scott Cowen, the City of New Orleans, the New Orleans Saints, the Sugar Bowl and other groups brought home a clear message of unity. Part of the four-inch-thick proposal from New Orleans included a video with messages of support from leaders.

“It's a great day for New Orleans  what we think is the best Final Four city in the country,” said Dickson, beaming with pride as he stood at the podium in front what he called his “great team,” the executive committee of the local organizing group, chaired by John Koerner, a Tulane alumnus and former Board of Tulane chair. 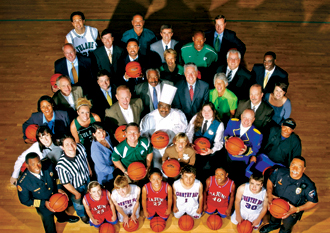 The New Orleans proposal to serve as a host city for the Final Four drew on support from across the city and state. Tulane is the host institution for the 2012 event. (Photo by Paula Burch-Celentano)

The NCAA decision comes as a vote of confidence in New Orleans and its resurrection after Hurricane Katrina.

“This is a good example for the rest of the community,” Dickson added. “It's how we rebuild ourselves, by coming together. When we come together, we can do great things.” He credited the work of the 75-person Local Organizing Committee with the success of the New Orleans bid.

In October, NCAA officials did a site check of the potential host cities. A four-person team visited New Orleans and reviewed the Louisiana Superdome, site for the 2012 championship, as well as the Convention Center, local hotels and venues for ancillary events. Dickson led a New Orleans team to Indianapolis last week to do a presentation to the full selection committee.

In the NCAA press release, Mike Slive, Division I Men's Basketball Committee chair, said, “The city's overall recovery efforts as well as the extensive renovations to the Superdome following Hurricane Katrina make it sensible for us to return the Final Four to New Orleans once again. We believe this award serves as another important step in the recovery process.”

Wednesday's announcement meant the second week of good news for the city from the NCAA. On Nov. 14, the NCAA named New Orleans as host city for the 2013 Division I Women's Final Four, with the University of New Orleans as the host institution.