Tulane admission officials are scheduled to be in Los Angeles today (Dec. 15) to interview 23 high school students vying to be a part of the university's first official “posse.” 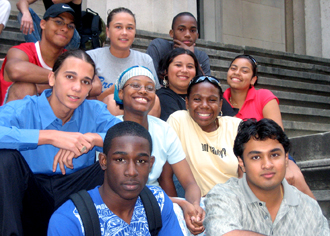 A multicultural “posse” of at least 10 high school students with outstanding leadership potential, like this group at Vanderbilt University, will receive four-year scholarships to attend Tulane through a partnership with the Posse Foundation. (Photo from the Posse Foundation)

A posse is a multicultural team of at least 10 high school students with outstanding leadership potential who will receive four-year scholarships to attend Tulane as part of an exciting new partnership with the Posse Foundation.

The nonprofit foundation is a college-access organization that works with urban public high schools to identify, recruit and train dynamic minority and economically disadvantaged students and send them to elite universities across the country.

“We're definitely excited about the trip,” says Faye Tydlaska, assistant vice president for enrollment management in the Office of Undergraduate Admission. “Posse is known as a leader in social responsibility and for placing students who have worked really hard, but who maybe would not be admitted along traditional channels because they may not have had access to the best college preparation.”

Tulane signed a partnership agreement with the Posse Foundation this summer to help further increase the diversity and quality of its undergraduate student body. The foundation works with 33 colleges and universities across the country and high schools in six major cities: Boston, Chicago, Los Angeles, New York, Washington, D.C., and Atlanta. Tulane's posses will all come from the Los Angeles area.

“Tulane is a phenomenal institution with a great reputation,” says Deborah Bial, Posse's president and founder. “We're especially excited to collaborate with President Scott Cowen to bring this program to New Orleans.”

Joining Tydlaska in Los Angeles today are Earl Retif, vice president for enrollment management and registrar, and Mike Hogg, associate provost for student affairs. The Tulane officials will spend the day interviewing students who've been selected from a pool of more than 1,000 students nominated by teachers and high school administrators. Posse designed a recruitment strategy called the Dynamic Assessment Process that uses nontraditional forums, such as workshops, group exercises and problem-solving sessions to evaluate students for leadership traits.

Posse Scholars get full scholarships to partner universities and enter an intensive eight-month college preparatory program to prepare for the rigors of academia. When the posse gets to campus, they are assigned a university mentor who meets with them as a team each week and with individual scholars every two weeks during their first two years.

So, why are the teams called posses? The name comes from a comment Bial heard from a student who said that he would never have dropped out of college if he had had his “posse” with him. The term reinforces the group's core belief that social networks are important in sustaining student achievement.

Since 1989, more than 2,200 public high school students have won more than $220 million in leadership scholarships from Posse's college and university partners. Once on campus, more than 70 percent of Posse Scholars go on to either form new campus organizations or to become presidents of already existing ones. In addition, Posse Scholars are persisting and graduating at a rate greater than 90 percent, far above the national average.

Tulane's involvement in the program is funded by more than $200,000 in contributions from the Board of Tulane. The Tortora Sillcox Family Foundation also provided $250,000 for the startup costs associated with the partnership.

Admission officials and Posse will announce Tulane scholarship winners in a ceremony on Jan. 7 in Los Angeles.