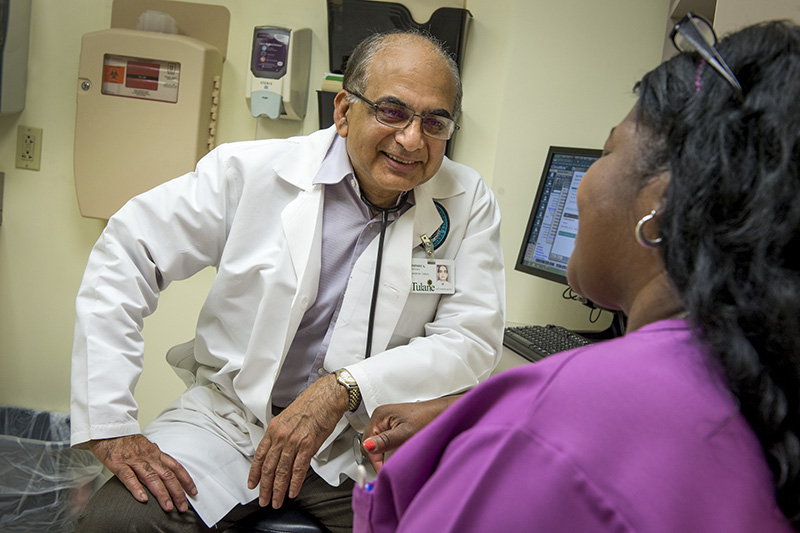 Dr. Vivian Fonseca, Tullis–Tulane Alumni Chair in Diabetes and professor of medicine, helped design and guide the LEADER study as it was implemented internationally across 410 sites. (Photo by Paula Burch-Celentano)

When American Diabetes Association officials gathered in New Orleans earlier this week and announced results of a major international drug trial, most of the focus was on the finding that the glucose-lowering drug Liraglutide reduces cardiovascular events by 13 percent for high-risk type 2 diabetes patients.

Roberta McDuffie, director of clinical research for Tulane University Clinical Translational Unit, played a vital role in making that happen. McDuffie was the national study coordinator for all 118 sites in the United States and a member of the study’s International Panel for Recruitment and Retention. McDuffie worked directly with staff at all domestic sites to make sure everything possible was being done to reach patients who weren’t responding to check in.

“This is a new record for the smallest number of loss-to-follow-up ratio for a cardiovascular outcomes trial of this size. It’s particularly notable because the FDA puts such a value on this for the validity of your data in the study results,” McDuffie said. “When they announced that retention rate, people were amazed. People stood up and were clapping.”

Tulane was also one of the largest sites for the LEADER trial with about 60 participants. Dr. Tina Thethi was the local investigator and Dr. Vivian Fonseca, Tullis–Tulane Alumni Chair in Diabetes and professor of medicine, played a lead role in designing the study.

“Tulane was very involved with this trial,” said Fonseca, who spent eight years on the LEADER global expert panel (from the study’s inception to completion) and chaired the U.S. national expert panel.

Most of the work was handled in Tulane’s Clinical Translational Unit, a suite of clinical rooms in the Tidewater Building that was expanded several years ago thanks to funding from the Louisiana Clinical and Translational Science (LA CaTS) Center.