Class of 2023: Tulane welcomes most selective and diverse class yet 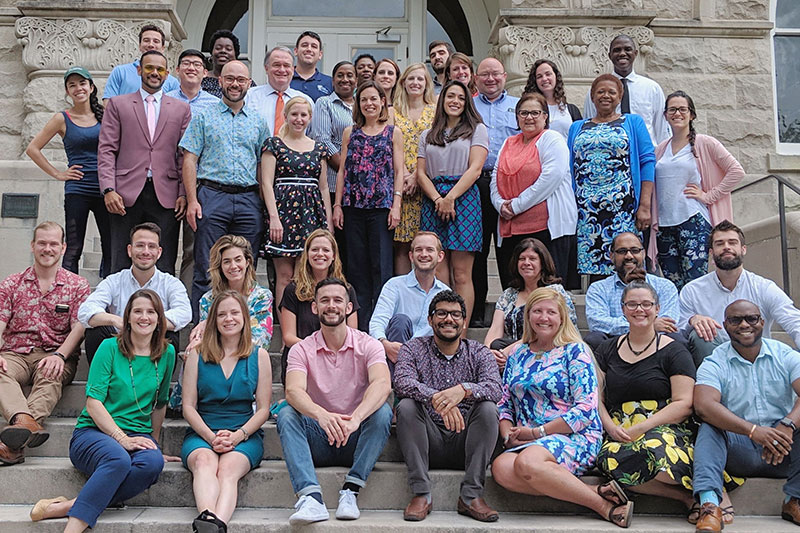 The work of Satyajit Dattagupta (standing, front row, far left) and Tulane’s Enrollment Management team, along with President Mike Fitts (standing, middle row, third from left), has resulted in the enrollment of the academically strongest, most selective and diverse class ever.

When the Tulane University community officially welcomes members of the Class of 2023 next fall, it’ll be a record-setting welcome.

The newest class of Tulanians includes just over 1,800 students. With more than 41,000 applications (6% more applications than last year), that equals an acceptance rate of 13%, the most selective class in university history. Moreover, Tulane’s yield — the number of students who were admitted into the university who actually go on to enroll — rose to about 35%, an increase over last year’s 29%. The yield rate has steadily increased and has improved 52% over 2015.

The Class of 2023 is one of the academically strongest, too, with a converted average SAT score of 1463.

Satyajit Dattagupta, vice president of enrollment management and dean of undergraduate admission, cited a number of factors that contributed to the enviable statistics of the Class of 2023.

“The Tulane experience is resonating with a lot of academically strong high school seniors,” said Dattagupta, citing “the ability to come into Newcomb-Tulane College and really have their entire paths open to them, in terms of which majors they can choose; the interdisciplinarity that we can provide; the fact that so many of our students do a double major; research opportunities; the ability to engage in the community and really cross boundaries — that’s why our numbers are where they are.”

The new class is also diverse, with almost one-third identifying as a student of color or an international student. The states with the most students in the Class of 2023 are California, New York and Louisiana. Twenty-seven countries are represented.

“An institution of our caliber should have students that come from different parts of the country and the world,” Dattagupta said. “It’s the most global class.”