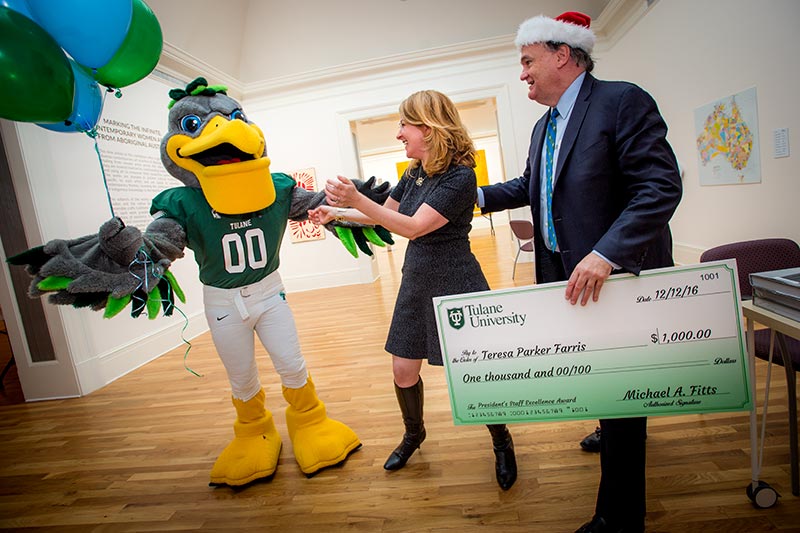 Tulane University President Michael A. Fitts and Riptide surprise Teresa Parker Farris, deputy director of the Newcomb Art Museum, with a $1,000 check as part of her 2016 President’s Staff Excellence Award. Parker Farris expressed her gratitude for the honor. “I’m very fortunate to work at Tulane. It has changed my life in profound ways,” she said. (Photo by Paula Burch-Celentano)

Nicey Callahan, an animal care technician at the Tulane National Primate Research, buried her face in her hands. Tulane University President Michael A. Fitts and Riptide were awaiting her arrival Monday to present her with an early holiday gift of $1,000.

“We are here to bestow upon you the President’s Staff Excellence Award for everything you have done for over 15 years,” said Fitts. “There is no one who cares about the animals more than you, and there’s nobody more beloved.”

“I have been going through so much this year — losing my father and my daughter having surgery. This is a blessing,” said Callahan, one of this year’s 12 honorees.

“What do you do for someone who represents the best of your university? You give them the President’s Staff Excellence Award.”

The President's Staff Excellence Awards are annually granted to Tulane staff members who exhibit outstanding achievement in their contributions to the university by either increasing productivity within a department, contributing to significant cost savings or exceeding expectations of service.

“The awards are given out to individuals who epitomize what dedication to the university is all about,” said Fitts.

For the first time, the awards were also bestowed upon two teams — the Case Management staff and the Academic Success Center staff.

“There needed to be recognition of teams that made a difference,” said Fitts, during his surprise delivery of a check for $2,500 to members of the Case Management office within the Lavin-Bernick Center.

Stopping by the Academic Success Center, Fitts congratulated the winners there, while Riptide posed with their $3,000 check.

“The students’ Success Center is a success,” said Fitts. “I hear about it across the country, and it’s something that I wish I had when I was in college.”