At the beautiful Russian Orthodox Cathedral of the Transfiguration of Our Lord in Brooklyn, N.Y., Tulane professor William Brumfield sat on an ornate chair that resembled nothing so much as a throne. Before him was not a congregation, however, but a TV camera. 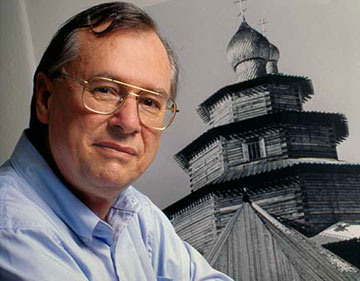 Tulane professor William Brumfield, above, speaks about the rise and fall of the Russian Empire on the the History Channel's program, "Engineering an Empire: Russia" that will air on Thursday (Dec. 7). (Photo by Paula Burch-Celentano)

Brumfield, a professor of Slavic studies at Tulane and an expert in Russian history and architecture, was in New York filming the latest episode in the History Channel's popular series, "Engineering an Empire."

On Thursday (Dec. 7) at 7 p.m. Central Standard Time and again at 11 p.m. CST, "Engineering an Empire: Russia" will air on the History Channel. The episode features Brumfield prominently as he talks about the rise and fall of the Russian Empire.

Brumfield says he was approached by the History Channel producers, who flew him to New York for the taping -- which is where the "throne" came in.

"They did the taping at a beautiful Russian Orthodox church in Brooklyn," Brumfield says. "They created a pedestal for me to sit on, and the camera crew shot upward with the icon screen in the background."

Brumfield spoke at length on various topics related to medieval Russian architecture and St. Petersburg, capital of the Russian Empire. The taping took from three to four hours, he says. At the height of its power at the end of the 19th century, the Russian Empire stretched across 15 time zones, incorporated nearly 160 different ethnic groups, and made up one-sixth of the entire world's landmass. Its Romanov tsars led with absolute authority.

The architecture and infrastructure that allowed the Russian Empire to grow -- and the calamitous effect its growth had on the Russian people, who overthrew the autocratic system in the 1917 Russian Revolution -- is covered by the episode. 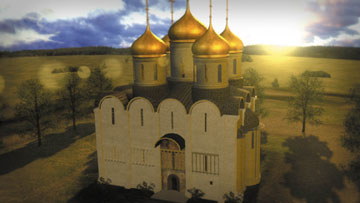 A computer-generated image shows a view of the Russian empire that is used in tomorrow night's program. (Image courtesy of KPI/Mechanism)

Brumfield has an international reputation as a leading authority on Russian architecture.

His growing body of photographic work on the architecture of Russia is featured in a permanent collection of the Photographic Archives of the National Gallery of Art in Washington, D.C., and is the subject of the William C. Brumfield Russian Architecture Collection, a collaboration with the University of Washington Libraries to digitize and catalog Brumfield's work.

The Library of Congress has archived a December 2005 Brumfield lecture on the library's webcast site.

In June, Brumfield was inducted into the prestigious Russian Academy of Arts at a ceremony in Moscow.