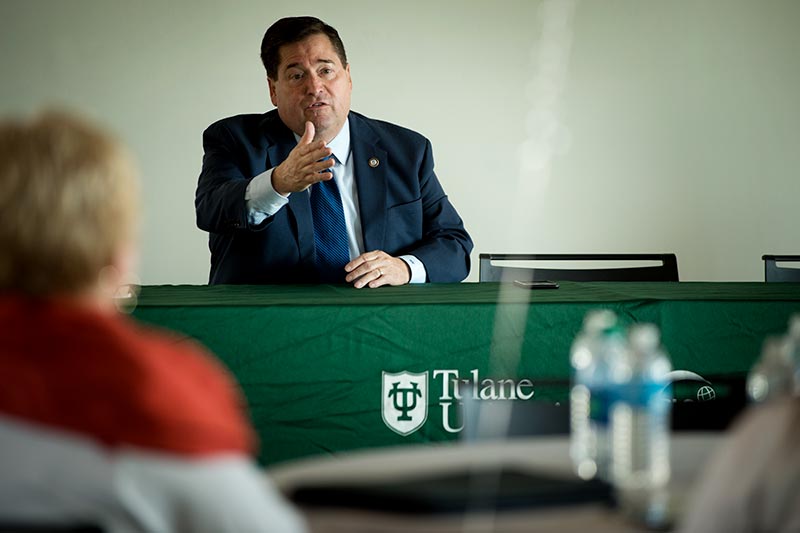 Former Plaquemines Parish President Billy Nungesser vividly remembers, in the days following the BP oil spill, how difficult it was to get disaster response leaders to listen to the dire warnings from local officials about the spill’s looming impact on wildlife and the state’s delicate coastal marshes.

“It felt like we were fighting against the team that should have been in place to help us,” said Lt. Gov. Nungesser as he recalled how the lack of coordination between response teams delayed wildlife rescue efforts.

Local leaders must be better prepared, Nungesser told officials gathered at Tulane River and Coastal Center Nov. 14 for the inaugural launch of an innovative new fellowship program that will help the state’s coastal parishes improve disaster response efforts. The five-day workshop, organized by Tulane University, trained 15 emerging leaders from five coastal parishes to more effectively develop plans that strengthen and coordinate the resilience of their communities to future disasters such as flooding, oil spills or hurricanes.

“The local leaders that are here today absolutely deserve a seat at the table and a voice and a vote in what is done after any disaster.”

“The local leaders that are here today absolutely deserve a seat at the table and a voice and a vote in what is done after any disaster,” Nungesser said. “I applaud each and every one of you for participating in this because it will bring results.”

The program is modeled after Tulane’s innovative disaster resiliency programs implemented across the world by the Tulane Disaster Resilience Leadership Academy (DRLA). As a member of the Consortium for Resilient Gulf Communities, Tulane’s ByWater Institute has adapted the DRLA curriculum to identify and address leadership challenges facing Gulf Coast communities. The consortium was established in 2015 with a three-year grant from the Gulf of Mexico Research Initiative to assess and address the public health, social and economic impacts of the 2010 Deepwater Horizon oil spill.