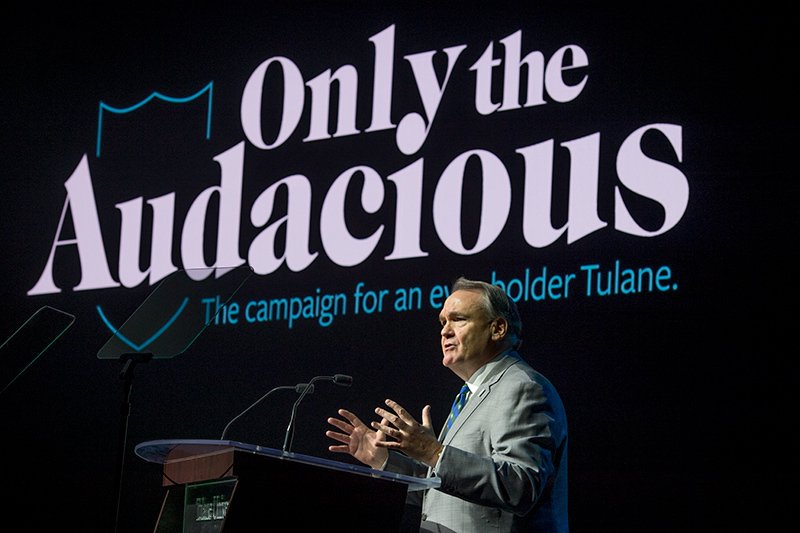 Tulane University President Mike Fitts announced Friday the start of the university’s most ambitious fundraising campaign ever — with a goal of raising $1.3 billion.

“For decades, we’ve accomplished spectacular, remarkable things with only a fraction of the endowment of some of our wealthier peers,” said Fitts during an event dubbed “The Big Reveal” held in Avron B. Fogelman Arena in the Devlin Fieldhouse. “I don’t know about you, but I’ve had enough of running a marathon from 15 yards behind.”

The campaign, which has already raised $820 million and is themed “Only the Audacious,” is chaired by longtime Tulane supporters Cathy Pierson, Hunter Pierson, Phyllis Taylor and Richard Yulman.

Following the big announcement, members of the Tulane community were treated to a variety of entertainment while being introduced to the campaign’s four pillars:

“We teach character and commitment, and there is nothing in the textbook about that,” said Taylor as she explained the transformative teaching pillar to the audience. Each chairperson followed with an explanation of a different pillar.

Peter Ricchiuti, William B. Burkenroad Jr. Clinical Professor in the A.B. Freeman School of Business, served as emcee for the afternoon, bringing a taste of comedy into discussions centered heavily on serious world problems that Tulane researchers are working to solve.

“In south Louisiana, water is a gift and a curse for us,” said Ricchiuti in his introduction of three Tulane researchers who study environmental issues and challenges pertaining to water resources. “They say we’re losing a football field of land every day and that means pretty soon we won’t be able to play football.”

For more details about the “Only the Audacious” campaign, read the university’s official announcement here.

[View the full video from the Big Reveal here.]