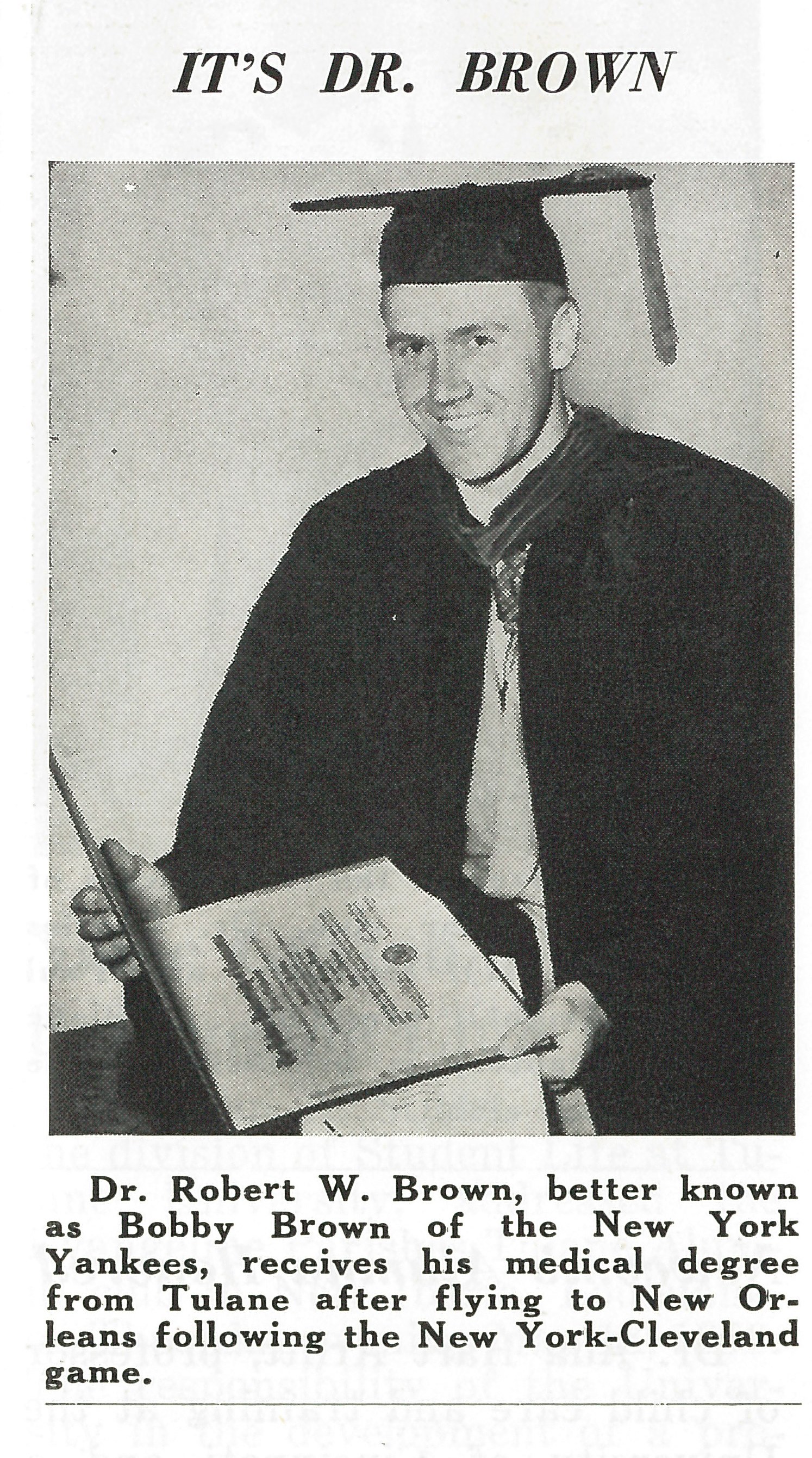 A photo of Dr. Bobby Brown graduating from Tulane School of Medicine in 1950. (The photo was published in an issue of the ‘Tulanian’ magazine at the time).

Dr. Bobby Brown (MD ’50) held a number of titles in his long life: World Series champion, Korean War doctor, president of the Texas Rangers and American League and cardiologist. Another title he held dearly was graduate of Tulane University School of Medicine. Brown passed away last week at the age of 96.

“Dr. Brown was an amazing individual,” says Dr. Lee Hamm, dean of Tulane University School of Medicine. “He not only got his medical degree while playing professional baseball at the highest level but went on to become an accomplished cardiologist. He always kept his connection to Tulane School of Medicine throughout the years, truly an amazing Tulanian."

Dr. Brown played baseball for the Green Wave from 1945-1946 and signed with the New York Yankees all while studying to be a doctor. He graduated from Tulane School of Medicine in 1950.

“It’s unfathomable today to contemplate anyone playing major league baseball while pursuing, and earning, a medical degree,” says Troy A. Dannen, Ben Weiner Athletics Director Chair of Tulane University. “The fact Dr. Bobby Brown achieved this gives insight into his immense talents and irreplaceable skills. We were all fortunate that this great Tulanian chose to contribute those talents and skill to our university, the game of baseball, and society in general.”

Dr. Brown played on four World Series championship teams, then retired at the age of 29 to become a cardiologist. He always stayed connected with Tulane, from speaking to the School of Medicine Class of 1985 at their Commencement to helping other college athletes and those in the field of medicine. The Dr. Robert W. and Sara K. Brown Scholarship is awarded alternately to a student-athlete or medical student every year.

“Bobby is by far the most outstanding Tulane medical alumnus that I have had the honor of knowing, and I greatly value his friendship over the past 23 years,” says Cynthia Hayes, senior director of medical alumni relations and development. “Bobby accomplished more than most in his lifetime, and he emulated true grit, confidence, and compassion. His legacy will live on through the scholarship that he has provided in his and his wife’s name.”

Brown died March 25, 2021 at his home in Ft. Worth. He is survived by three children, 10 grandchildren and 14 great grandchildren. He was preceded in death by his wife of 61 years. Sara French Brown graduated from Newcomb College in 1951 and remained a faithful alumna for the rest of her life.

Tulane’s year in COVID-19 events, breakthroughs and more
Tips on being your own best health advocate
Students from ‘15 White Coats’ reflect on becoming Black doctors
Virus hunter: 'We have to double down' to fight COVID-19 variants
Effort to prevent, treat COVID-19 gets a boost