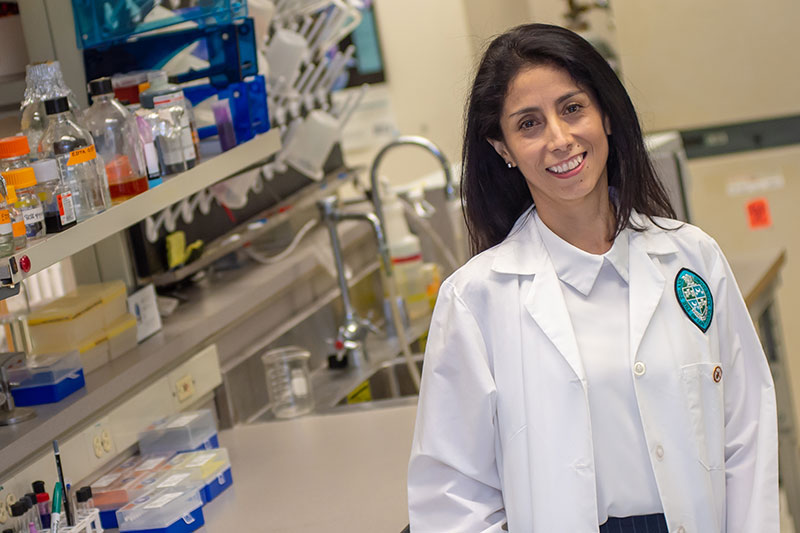 Claudia Herrera, PhD, researcher at Tulane's School of Public Health and Tropical Medicine, will lead a team of researchers in developing more reliable tools for the diagnostic and genotyping for congenital Chagas disease. (Photo by Sally Asher)

Herrera is leading a team of researchers from four different countries and institutions including the Johns Hopkins Bloomberg School of Public Health, Access Bio Inc., the Free University of Brussels in Belgium, the Institute for Investigations in Genetic Engineering and Molecular Biology in Argentina, and the Clinical and Epidemiological Research Unit of Montevideo in Uruguay. The Tulane team includes Eric Dumonteil, PhD, researcher from Tulane’s Department of Tropical Medicine.

Chagas disease is a neglected disease caused by the protozoan parasite Trypanosoma cruzi.

The disease is a serious public health issue in Latin America and the southern United States and is severely undiagnosed.

In the Americas, less than 1% of the over 6 million expected cases have been identified, according to Herrera. Due to limited sensitivity and specificity and frequent discordant results among diagnostic tests, the World Health Organization recommends a minimum of two positive tests for the serological diagnosis of T. cruzi infection, including congenital and maternal cases.

The team plans to develop more reliable tools for the diagnostic and genotyping of T. cruzi.

“This would be fundamental to better understand T. cruzi molecular and clinical epidemiology, including the links between parasite diversity and congenital infection, leading to a better health care for Chagas disease patients and particularly infected pregnant women,” Herrera says.

“These advances will also spur molecular research on T. cruzi much beyond our own research focus, by further exploring parasite evolution and genetic diversity allowing us to understand the potential relations between parasite characteristics, congenital transmission and clinical symptoms.”