Dr. David Blask, a Tulane University circadian rhythms expert, and his laboratory manager, Robert Dauchy, are prominently featured in "Lights Out," a documentary that recently premiered on the Canadian Broadcast Company's “The Nature of Things,” hosted by David Suzuki. 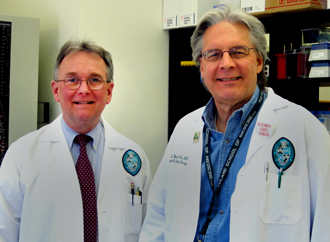 Robert Dauchy, left, and Dr. David Blask are featured in “Lights Out,” a documentary on the adverse health effects of increased exposure to light at night. (Photo by Melissa Wren)

Produced by Markham Street Films, the documentary, portions of which were shot at Tulane last year, joins four leading scientists in the lab and in the field to explore the effects of light pollution on our health, particularly with regard to cancer and depression. This is the second documentary to feature Blask's research in the last two years.


In the film, Blask and his team investigate the reasons why there is an increased incidence of some cancers among night shift workers. They hypothesize that increased exposure to light at night and subsequent disruption of the natural circadian rhythms in these individuals could play a role, and they have developed a novel animal model through which they have tested their theories in human tumors.

The American Medical Association adopted recommendations last year based on a report co-authored by Blask and three other researchers asserting that certain types of nighttime lighting can adversely affect health and may be linked to breast cancer and other medical conditions.

“This was an important first because it focused worldwide attention on the potential health risks associated with exposure to light at night,” says Blask, “but also because it may help to influence federal grant money to further study these risks, and the importance of that cannot be underestimated,” says Blask, a professor of practice and vice chair of the Department of Structural and Cellular Biology.

A third documentary featuring Dr. Blask and his team  shot by a Japanese film crew  also aired recently as part of a Japanese TV documentary series, “The Origins of Disease  Cancer.”

Melanie Cross is manager of communications at the Tulane Cancer Center.