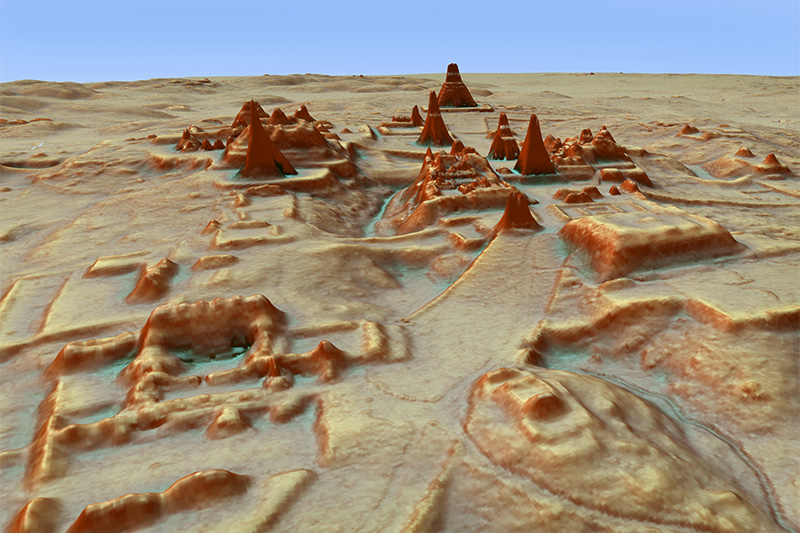 LiDAR laser technology yielded a remarkable discovery in Guatemala’s forest: ancient cities with more than 60,000 structures. Two Tulane researchers, Marcello A. Canuto and Francisco Estrada-Belli, are part of the project, which will be featured on the National Geographic Channel. (Image courtesy of Luke Auld-Thomas and Marcello A. Canuto)

Two Tulane archaeologists are part of a team of researchers receiving international media coverage and acclaim for the remarkable discovery of dozens of ancient cities in Guatemala through the use of jungle-penetrating LiDAR (light detection and ranging) technology.

Marcello A. Canuto, director of the Middle American Research Institute at Tulane, and Francisco Estrada-Belli, a research assistant professor and director of the Holmul Archaeological Project since 2000, say the discovery in the Petén forest of Guatemala includes more than 60,000 structures, including isolated houses, large palaces, ceremonial centers and pyramids.

“It seems clear now that the ancient Maya transformed their landscape on a grand scale in order to render it more agriculturally productive,” said Canuto, who has three decades of field experience in Maya archaeology. “As a result, it seems likely that this region was much more densely populated than what we have traditionally thought.”

LiDAR technology is able to pierce through thick forest canopy and map features on the earth’s surface. The maps can often reveal changes in elevation, enabling archaeologists to identify human-made features on the ground, such as walls, roads or buildings.

“The ancient Maya transformed their landscape on a grand scale in order to render it more agriculturally productive.”

Estrada-Belli, who specializes in the use of remote sensing and geographic information systems on early Maya civilization, said the discoveries were made in a matter of minutes, compared to what would have taken years of fieldwork without the LiDAR technology.

“Seen as a whole, terraces and irrigation channels, reservoirs, fortifications and causeways reveal an astonishing amount of land modification done by the Maya over their entire landscape on a scale previously unimaginable,” he said.

The story of the discoveries will be told in National Geographic’s “Lost Treasures of the Maya Snake Kings,” a one-hour documentary that premieres on Tuesday, Feb. 6, at 8 p.m. CST and will air again on Monday, March 5, at  8 a.m. CST on the National Geographic Channel.

The project was structured and funded by Fundación PACUNAM (Patrimonio Cultural y Natural Maya), which was founded in 2006 in Guatemala as a nonprofit organization dedicated to fostering scientific research, conservation and sustainable development of cultural and natural resources in the Maya Biosphere Reserve. Other team members include Thomas Garrison, an assistant professor of anthropology at Ithaca College.

Activists, journalists and celebrities team up to ‘Unrig the System’
Real estate in real time
Exiled Edward Snowden makes virtual appearance at Tulane
Builders, heroes and a voice for girls
A voice for girls