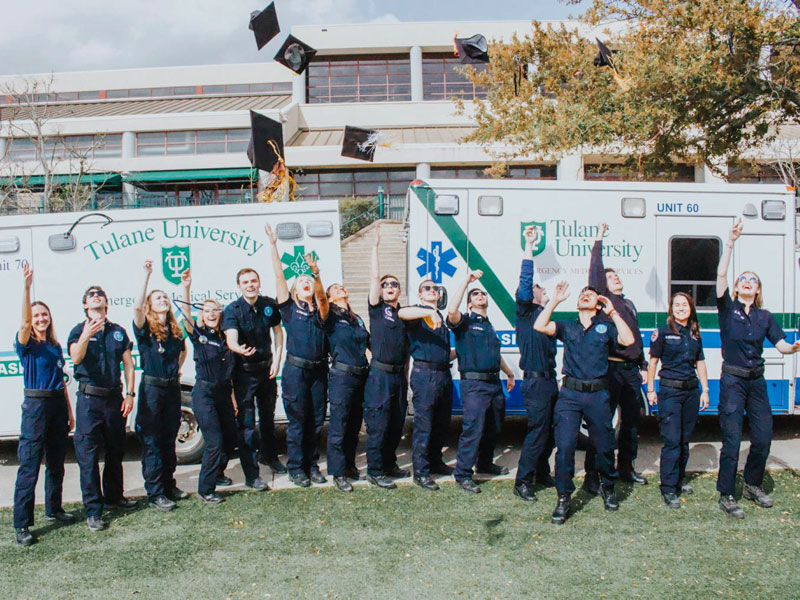 They came to Tulane University from an array of backgrounds and interests, forming a family of sorts through their love of helping others. But it wasn’t their dorm floors, club memberships or study groups that led to that close-knit bond.

As they were navigating their way through freshman year, some wondering if they would ever fit into college life, they heard about a group called TEMS — Tulane Emergency Medical Service — and knew they had found the group that would change their lives.

TEMS is student-run basic emergency medical service based on Tulane’s uptown campus and managed by Campus Health. Members are trained and certified Basic Emergency Medical Technicians, providing medical first-aid treatment for minor injuries to students, faculty, staff and visitors as well as transport to New Orleans area hospitals, depending on the nature of the emergency.

Among the group’s 35 members were 17 seniors who were honored as “Helpers” by Tulane President Michael Fitts at the May 16 recognition ceremony, TUgether: Connecting the Class of 2020.

“Heroes & Helpers” recognizes a person or team among the Tulane community engaged in extraordinary efforts on behalf of others in the battle against COVID-19. For Jordan Krum, Merodean Huntsman and Shahamat Uddin, that meant putting their own health at risk to volunteer for New Orleans EMS as COVID-19 was quickly becoming a crisis across the city. All the while, they were completing remote classwork to earn their degrees.

“I remember sitting at home feeling useless that I had an EMT license but wasn’t able to help the city in its time of need,” Krum said. “When the call for volunteers went out, I immediately said ‘yes’ because I wanted to contribute to the healthcare system that already seemed so overwhelmed.”

Uddin divided his time between NOEMS and the New Orleans Medical Reserve Corps, the latter for which he worked 10-hour shifts at different testing sites, assessing patients’ vitals and triaging them based on their health.

It wasn’t until he began volunteering with NOEMS that he realized the extent of the COVID-19 crisis.

“The uncertainty of the virus and its disparate impact on our community made it difficult to rely on the medical techniques I had been practicing in the past,” Uddin said. “There were so many times I wished I just had an answer to my patients' questions, but I really just had to be a helping hand for them in this dire time of need.”

Huntsman, a native of Park City, Utah, is headed to medical school at the University of Utah and says her TEMS and NOEMS experiences have given her a head start in patient care. Since 2017, she has volunteered 500 hours, including 110 hours as a driver and primary patient care provider during the COVID-19 crisis. She has also served as a crew chief and a basics instructor.

“Being an instructor was definitely one of my favorite parts of TEMS, as it allowed me connect with the newest members and share what I’ve learned from my time working on Tulane and New Orleans ambulances,” she said.

Krum said his TEMS and NOEMS experiences convinced him to pursue a career in medicine, though he wasn’t always sure he was cut out for such a career.  He remembers dropping a chemistry class freshman year, thinking he’d never make to medical school.

That spring, he applied to be a TEMS volunteer, and everything changed.

“I knew that my passion for healthcare didn’t just disappear, so I was intrigued at the idea of getting to serve in a volunteer medical role, help my peers and make new friends.”

Four years later, he is working to complete some coursework before applying to medical school. He hopes to become an emergency medicine physician and believes his EMS experience will go a long way in providing the care that every patient deserves.

“Often, when someone calls EMS, they are experiencing one of the worst days of their lives,” Krum said. “It’s a special privilege to be there for someone on one of those days, to be able to give them the medical treatment they need and to connect with them human to human in one of their most vulnerable states.”