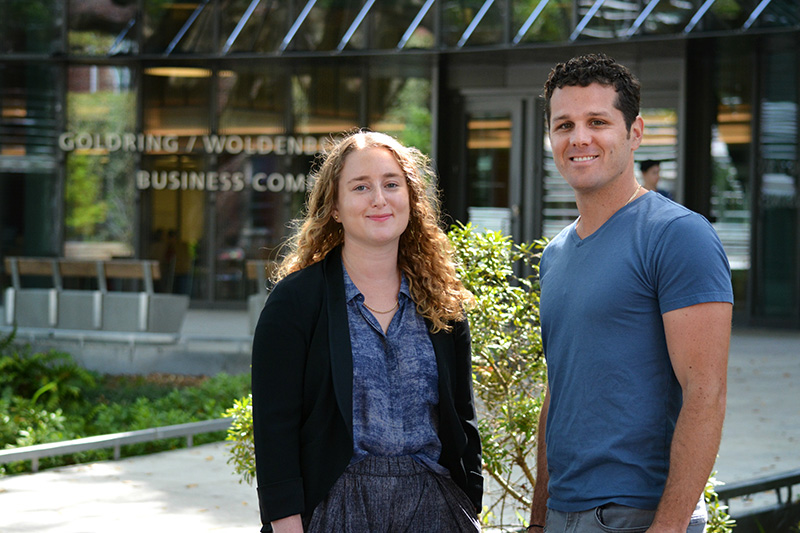 Lydia Winkler, a third-year law and business student, and Marco Nelson, Navy Academy graduate and a first-year MBA student, are the creators of RentCheck, a rental inspection app that allows both tenants and landlords to track a property's condition using time-stamped photos. (Photo by Alina Hernandez)

Two Tulane students have turned their gripes with renting into a company that could revolutionize how lease agreements are managed.

Lydia Winkler, a third-year law and business student, and Marco Nelson, a first-year MBA student, are the creators of RentCheck, a rental inspection app that allows both tenants and landlords to track a property's condition using time-stamped photos.

Winkler knows the tenant perspective and Nelson is a landlord.

“We’re building a product that alleviates the friction between landlords and renters around security deposits.”

Winkler was motivated to create the app after having to sue her previous landlord who refused to return a $1,600 deposit after her first year of law school. Nelson owns property out of state and felt routinely frustrated by the lack of transparency with the condition of his rentals between move-in and move-out of tenants.

“It took me a year to recover that $1,600 deposit,” Winkler said. “I could not have successfully represented myself in court if I had not gone to law school, plus, not everyone can wait a year to get their money back.”

RentCheck works like this: A tenant downloads the app and makes an unalterable and time-stamped record of a property’s condition before moving in. The app prompts the user to add notes, take photos, and generally guides them through checking appliances, electrical outlets and the condition of each room. The photos and notes are then uploaded and cannot be altered.

“My law school education helped me understand the importance of integrating time-stamped photos into RentCheck and how we can help both landlords and tenants as a third party holding imperative property information,” Winkler said.

If a landlord downloads RentCheck they can set up a property and request the renter to perform the move-in inspection. After the inspection is complete the landlord can review all images and notes stored in the app.

“This way, there is a record of the inspection and no one can dispute what was there on move-in day,” Winkler said.

More than 30 percent of all renters lose all or some of their deposit at the end of a lease, Nelson said. And while the concept of leasing a property isn't new, most rental agreements are done just as they were 40 years ago – with a written contract, a paper move-in checklist and a couple of signatures.

“RentCheck brings transparency and accountability to not only landlords like myself, but also renters. We’re building a product that alleviates the friction between landlords and renters around security deposits,” Nelson said.

As for their business model, the duo launched RentCheck in March and it’s already creating buzz in the market, they said.  Users are offering suggestions and Nelson is issuing updates to improve the app.

And it’s all happening just in time: Thousands of Tulane students are heading home for the summer or fulfilling their rental agreements in the coming weeks.

“We’re basically standardizing the move-in and move-out process,” Winkler said. “Based on the feedback we’re getting from our users, there’s room to disrupt the industry.”

You can download the RentCheck app on Apple products now, and an Android version is in the works. More information can be found on Facebook and Instagram.