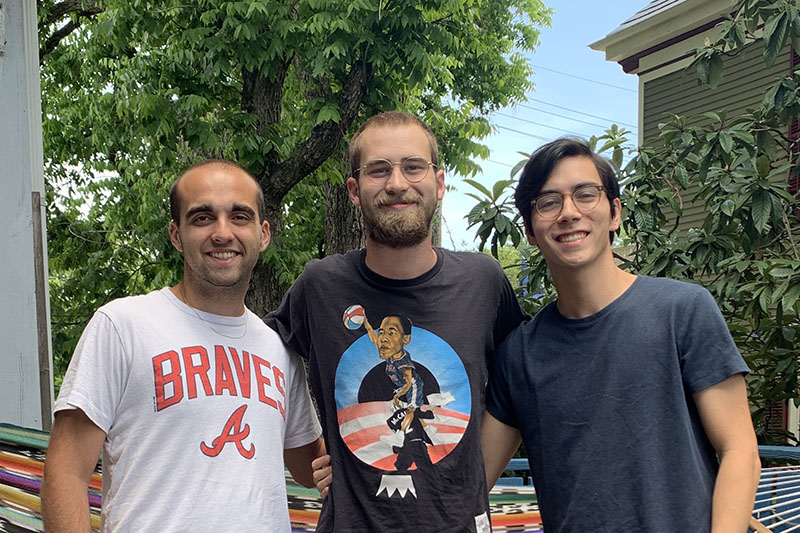 Tulane graduating seniors Ross Berlin, Max Steitz and Matthew Wu launched Give Back Tulane, a fundraising initiative that as of May 8 had raised more than $45,000 for Second Harvest Food Bank, the Jazz and Heritage Foundation’s Music Relief Fund, and the New Orleans Business Alliance’s Gig Economy Relief Fund. (Provided photo)

As graduating seniors, Ross Berlin, Matthew Wu and Max Steitz never imagined they would be spending the final months of their Tulane experience in isolation, completing coursework away from the campus they have called home for the past four years.

But they weren’t about to let the COVID-19 crisis bring them down. Rather than feel sorry for themselves, they decided to use the extra time on their hands doing something positive for the city that has given so much to them.

The result: Give Back Tulane, a fundraising initiative that as of May 8 had raised more than $45,000 for Second Harvest Food Bank, the Jazz and Heritage Foundation’s Music Relief Fund, and the New Orleans Business Alliance’s Gig Economy Relief Fund.

“Students saw a chance to help and jumped on the opportunity.”

“We launched about three weeks after everyone left Tulane, when it was really starting to set in that our student body had been dispersed around the country, displaced from our homes in New Orleans and at Tulane,” Berlin said. “We were really able to capitalize on this sentiment of students missing our city, particularly as New Orleans became a hotspot for the virus.

“By creating a sentiment that it is the duty of Tulane students to give back to the city that has given us all so much, we were able to really blow up on Instagram, raising almost $40,000 in 12 days,” he said.

All the while, they were drawing interest from other colleges and universities, which wanted to bring similar initiatives to their campuses. “Indirectly, between our own efforts and advice we’ve given out, we’ve helped raise over $200,000 nationally for local relief funds,” Wu said.

Nonprofit and civic work are nothing new to Wu, a political science major from  Portland, Oregon; Steitz, an international development and relations major from New York City;  and Berlin, a communications and social innovation student from Atlanta.

Steitz launched Glass Half Full, an initiative to bring glass recycling to New Orleans. Berlin served as philanthropy chair of Zeta Psi and the Interfraternity Council, helping raise over $250,000 for Second Harvest in partnership with the New Orleans Saints 50/50 Raffle. Wu served as a fundraising intern for the Gavin Newsom for Governor campaign in California.

Despite that experience, they credit Walter Isaacson, the Leonard Lauder Professor of American History and Values at Tulane, with giving them the boost they needed to help Give Back Tulane succeed.

“He was our most valuable connection,” said Berlin, who took a course with Isaacson titled “The Digital Revolution.”

“I actually hopped on a Zoom call for our class early one day and found myself one on one with Walter himself. In a rather spontaneous choice, I started probing the idea to him. He instantly saw an opportunity to help empower his students towards success.”

Isaacson connected them to the Greater New Orleans Foundation (where Give Back Tulane is housed) and helped guide them in creating a viral marketing strategy aimed at appealing to Tulane students wherever they were.

“His expertise and willingness to help was crucial to getting our effort off the ground, and we were so lucky to have forged a lifelong connection with him through this process,” Berlin said.

Ultimately, it was Tulane students themselves who dug into their pockets to bring the fund close to its $50,000 goal. Donations ranged from $5 to over $200.

“This money did not come from parents, alumni or more official outlets,” Berlin said. “Students saw a chance to help and jumped on the opportunity. We worked hard to make our campaign something the average Tulane student ‘couldn’t miss’ on their social media, but we never could have expected the outpouring of support that followed.”