With three sons who are actors, Tulane library technician Kelly Richert has gotten accustomed to seeing her children on stage. But an upcoming production at Tulane is offering this veteran mother of the stage a bit of a twist: two of her sons have starring roles in Oliver!, the first production in this season's Summer Lyric Theatre on the Dixon Hall stage at Tulane University. 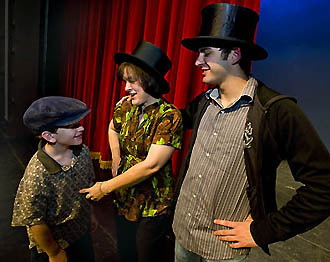 Kelly Richert, center, a library technician at Howard-Tilton Memorial Library, has three sons who have “tread the boards” as actors. Two of them will be in Oliver!, the first production of Summer Lyric Theatre's season  Aaron Richert, 8, left, and Michael Moore, 18, right. (Photo by Paula Burch-Celentano)

Aaron Richert, 8, will star as Oliver, and Michael Moore, Kelly Richert's 18-year-old, will play the Artful Dodger when the show opens on June 18. Starring as Fagin is New Orleans comedian and crowd-pleasing actor Ricky Graham.

While the 8-year-old may seem young to play Oliver, who is identified as a 13-year-old in the libretto, Aaron has a lot of experience. He says he doesn't have qualms about memorizing all of his lines because he's done it before.

“Both are such hams, but Aaron is the worst of the two,” says Kelly Richert, whose third son, Sean, a student at Tulane, has taken the Summer Lyric Theatre stage several times.

Aaron began his stage career two years ago in Will Rogers Follies produced by the Jefferson Performing Arts Society and followed that by playing the role of Tiny Tim in A Christmas Carol. He played opposite Ricky Graham in NOLA Project's Assassins in October 2008. In March, he took on a dramatic role in The Trojan Women, a Greek tragedy performed at Loyola University.

“I could only watch him die once, screaming for his mother. It was very emotional,” says Kelly, who works in the monograph acquisitions department of the Howard-Tilton Memorial Library. “Your heart is ripped out  that's your kid up there! Aaron loved every minute of it.”

Michael plans to pursue a musical theater major at Elon University in North Carolina in the fall. As for Aaron, his immediate ambition is to work on his dancing.

The Tony Award-winning Oliver! vividly brings to life the characters from Oliver Twist by Charles Dickens. The score features Lionel Bart's irresistible songs, including “Food, Glorious Food,” “I'd Do Anything,” “Consider Yourself,” “Where is Love?” and “As Long as He Needs Me.” Oliver! will be directed by Summer Lyric Theatre's Artistic Director B. Michael Howard and choreographed by Diane Lala.

Season tickets are on sale now and single show tickets go on sale Monday (May 11). Oliver! runs June 18â“21, Company runs July 9â“12 and the season concludes with South Pacific, which runs July 30â“Aug. 2. Shows are Thursday, Friday and Saturday evening at 8 p.m. with one matinee on Sunday at 2 p.m. Tickets can be purchased in person at the box office, by mailing in an order form, or charging by phone at 504-865-5269. Box office hours are Mondayâ“Friday from noonâ“5 p.m.