After the storm surge of Hurricane Katrina so badly humbled the New Orleans flood-protection system, many wondered how a major city could have been founded on such a precarious site. Those who questioned the prudence of rebuilding in so questionable a site were echoing arguments heard 300 years earlier among French colonials debating where to locate the primary city of Louisiana, suggests geographer Richard Campanella in his new book, Bienville's Dilemma: A Historic Geography of New Orleans. 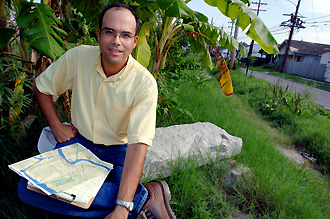 Tulane geographer Richard Campanella takes readers on a historic tour of New Orleans in his newest book, including the geographic dilemmas that have faced the city since its founding. (Photos by Paula Burch-Celentano)

According to Campanella, associate director of the Tulane/Xavier Center for Bioenvironmental Research and a research assistant professor in the Department of Earth and Environmental Sciences, Bienville was forced to decide whether New Orleans should be built on the safest site or in the most strategic location. One choice would sacrifice expediency; the other would expose inhabitants to greater risk.

“It was a classic dilemma  a problem involving a difficult or unpleasant choice, which could yield undesirable consequences,” says Campanella.

Such dilemmas regarding people and place continue to challenge us. “In the case of Louisiana today,” says Campanella, “[the question is] should citizens remain in eroding marshes and continue centuries of tradition, or end their way of life and move inland so that aggressive coastal restoration may begin?”

Dilemmas, he says, are as intellectually stimulating and morally challenging as they are distressing.

“Dilemmatic places  cities like New Orleans that are important yet costly, strategic but troubled, triumphant yet tragic  are among the most intriguing locales on Earth.” 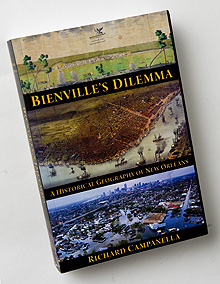 Tulane faculty member Richard Campanella will be signing copies of his new book, Bienville's Dilemma: A Historic Geography of New Orleans, at Octavia Books in New Orleans on Saturday (Nov. 8) at 6 p.m.

In the 68 articles and essays presented in Bienville's Dilemma, Campanella takes readers from the Ice Age to the present day, weaving into a historical narrative of New Orleans the threads of geology and topography, sociology and demography, politics and policy, and offering an explanation of how this inevitable city was indeed able to flourish in an improbable location. It commences with a detailed historical timeline of events of geographical significance, from prehistory to post-Katrina.

“The book came together as I contemplated the passage of a natural landscape to an urban cityscape,” says Campanella, who traced the transformation from the formation of the landscape through settlement, urbanization, population, environmental manipulation, devastation and finally restoration.

As a geographer with a background in the mapping sciences, Campanella also included dozens of custom-made maps, graphs, computer-generated perspectives and photo montages.

When asked what he hopes readers take away from Bienville's Dilemma, Campanella says, “On one level, I hope readers enrich their knowledge and understanding of New Orleans through the book's analytical findings. On a higher level, I hope readers come to share my experience in viewing this city as a metaphor, a prism and a portal through which so many compelling stories about people and place may be studied.”

Next spring, Campanella will teach a colloquium course “Dilemmas of New Orleans” through the Tulane honors program. He will be signing copies of Bienville's Dilemma at Octavia Books on Saturday (Nov. 8) at 6 p.m.

Other books by Campanella include Geographies of New Orleans: Urban Fabrics Before the Storm, Time and Place in New Orleans and New Orleans Then and Now.