On Friday (Aug. 28), Louisiana Gov. Bobby Jindal joined other past and present elected officials and leaders from Tulane and Louisiana State universities to celebrate the meeting of the minds that will pave the way for a new University Medical Center in New Orleans. 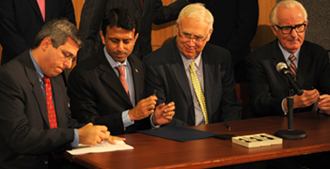 The compromise that received approval from the Tulane and LSU boards establishes a governing board for a public hospital that will be the flagship for teaching Tulane and LSU medical residents as well as providing health care to the community.

Hundreds crowded into the news conference in downtown New Orleans to witness Jindal signing the Memorandum of Understanding, along with Alan Levine, secretary of the Louisiana Department of Health and Hospitals, Tulane President Scott Cowen and LSU President John Lombardi.

“I sincerely want to praise the passion, the intensity, the integrity of Scott Cowen and John Lombardi,” Jindal said. "They kept what was best for Louisiana foremost in their minds.”

The new plan gives LSU four appointees on an 11-member board of directors. Tulane and Xavier universities each will have one seat on the board. Another seat will be rotated between Dillard University, Delgado Community College and Southern University, with four seats for independents who do not have affiliations with academic institutions or hospitals.

“I have never been more optimistic about the future of New Orleans than I am today, #x201d; said Cowen. “We continue to make progress to reinvent ourselves as a truly great 21st-century city while retaining our charm, heritage and culture. The realization of this opportunity, borne out of great tragedy, is our responsibility, and we must succeed.”

While much has been made of the differences between Tulane and LSU, Cowen said little attention has been given to what the two universities have in common. 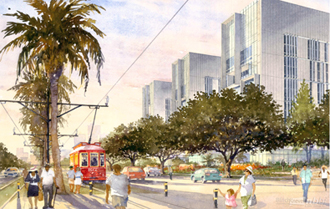 The proposed design of the new University Medical Center is a joint venture of Blitch Knevel Architects of New Orleans and NBBJ of Seattle.

“There is no doubt in my mind that we share a vision of building and managing a world-class academic medical center that will rival those in Houston, Atlanta, Birmingham and cities beyond,” Cowen said.

A financing plan for the proposed 424-bed hospital still needs to be worked out. The estimated cost is more than $1.2 billion. Jindal said the signing of the agreement allows the state to move ahead to line up funding. The city of New Orleans has put forward $75 million for land acquisition, Mayor Ray Nagin said, and the state has committed $300 million.

“Let me be very clear about this,” Jindal said. “The state is absolutely committed to moving forward in building this new complex.”

The Medical Center of Louisiana at New Orleans (Charity Hospital) was closed after Hurricane Katrina and has not reopened in the four years since.