Unraveling a Mummy Mystery in Peru

Tulane University anthropologist Kit Nelson is the co-director of a National Geographicâ“sponsored team that is in the process of unraveling a mummy bundle found in Peru's historic Huaura Valley. The mummy is believed to have been an elite member of the Chancay culture, a civilization that thrived in the central coast of Peru from about 1000 to 1400 AD. The territory of the Chancay was later home to the Incas. 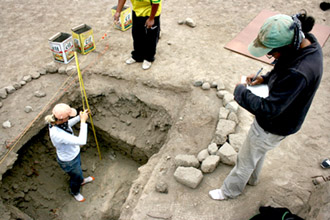 Kit Nelson, shown at left at an archeological dig in Peru, leads the team that is unwrapping a mummy from Peru's historic Huaura Valley in a project sponsored by National Geographic. (Photo by Nathan Craig)

In addition to the historical significance of the find, Nelson is expanding the education of Tulane students through her groundbreaking research. Four of her students were involved in her Peru research this past summer and one of her graduate students assisted with the opening of the mummy bundle.

Nelson's work was funded by a Faculty Enhancement Grant from Tulane University and through a grant from National Geographic's Committee for Research and Exploration, a century-old organization that funds important work in the earth sciences throughout the world.

National Geographic News has published an article, video and photo gallery on the work of Nelson and her fellow researchers.

The well-preserved Chancay mummy that is the current focus of the team was found in the center of a tomb located within a large adobe walled compound.

"So little is know about the Chancay culture that the tomb, along with the other excavations this past summer, will shed new light on an important north central coast culture," said Nelson, who is assistant professor in the Tulane anthropology department. "The mummy and its associated offerings affirm several points that have been alluded to from analysis of looted material, such as the presence of elites, the use of metals and the creation of incredible textiles. 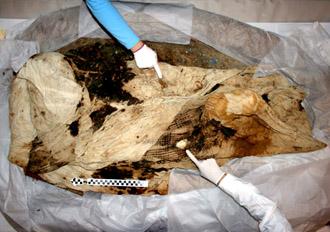 Researchers prepare to start unwrapping the mummy bundle found in a tomb on the north central coast of Peru. (Photo by Kit Nelson)

"We now have a better picture of the context of these elements and will soon have associated radiocarbon dates to help secure the timing of the Chancay."

In addition to the mummy, the tomb contained several offerings including whole vessels, a bag of fruit and other goods.

The individual was wrapped in layers of textiles, and several offerings were placed within the layers. The offerings included balls of different colors of cotton, ground corn and corncobs, a bag with metal and a bag with some type of plant material.

The individual was a male, approximately 30â“45 years old and was dressed in two tunics and a loincloth. Around his knees and his waist were slingshots.

Nelson and her fellow researchers, including two physical anthropologists, a textile specialist, a metals expert and a pathologist, have been painstakingly rolling back layer upon layer of textile and documenting the original preparation of the body and the associated offerings. Their work on the mummy should be completed by November, after which the mummy and its objects will be prepared for an exhibition in Lima. 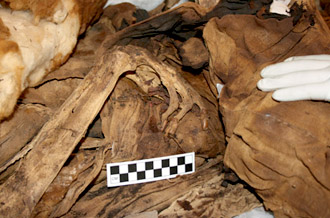 The well-preserved mummy, with a hand shown at center, was wrapped in exquisite textiles with small offerings tucked inside the layers. (Photo by Kit Nelson)

During the period in which the Chancay lived, the central coast of Peru was marked by the formation of regional powers after the collapse of the large empires of the Middle Horizon period (A.D. 600). Two empires expanded through this area during a time of regional reorganization, the Chimu and later the Inca.

Through this period of unrest and imperialism, the Huaura Valley maintained internal cohesion, visible in the continuation of regional style architecture, artifacts and art styles.

This Chancay tomb, the only one excavated and scientifically examined, will shed light on the local social structure and the interaction of the Chancay with the other major powers during this period.

While Nelson's work continues, she also plans to continue to involve Tulane students in her projects. "I hope to take undergraduates into the field next year as well," she added.