Fashion designer and businessman Tommy Hilfiger has seen a lot of ups and down in the fickle fashion industry, but he remains positive about the outlook for his clothing line despite the economy's downturn. In a visit to the Tulane campus, he told business students that he believes his label  as an affordable premium brand  is in a good position for success. 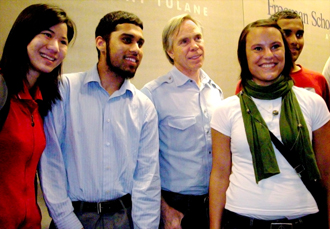 Students in the A. B. Freeman School of Business enjoy meeting the fashion designer and businessman Tommy Hilfiger, center, after his talk and question-and-answer session on campus. (Photos by Alicia Duplessis)

“When the going gets tough, you're not going to buy a car or a house or a TV, but you can afford a shirt,” Hilfiger said. “You could go to a mall and buy one item to put on, and when you go out tonight you'll feel better about yourself.”

The designer was in New Orleans on Oct. 24 for the grand opening of Macy's at Lakeside Shopping Center, which marked the store's return to the New Orleans area after Hurricane Katrina. He took the opportunity to visit the campus for a wide-ranging, question-and-answer session with students at the A. B. Freeman School of Business.

Hilfiger, who serves as principal designer of the Tommy Hilfiger Group, started a retail clothing store, People's Place, when he was 18 years old, but he eventually enrolled in college to satisfy his father.

“After two weeks I dropped out,” Hilfiger told the audience of business students. “I always said the business was my college degree, but if I had had a business degree, maybe I wouldn't have fallen into some of the potholes along the way.”

One of those potholes was bankruptcy. Hilfiger expanded People's Place into a small chain in upstate New York, but when he was 23 years old his accountant told him he owed more money than he had.

“My dream was to be creative, so I wasn't watching the numbers,” Hilfiger said. “From that day onward, I decided to become a businessman/designer. A lot of people have criticized me for it, but every successful designer has to have business acumen.”

In 1985, after building a reputation within the industry as an up-and-coming designer, Hilfiger launched his own label with a sportswear collection based largely on the clothes in his closetbutton-down Oxfords, chinos, jeans and cotton sweaters. 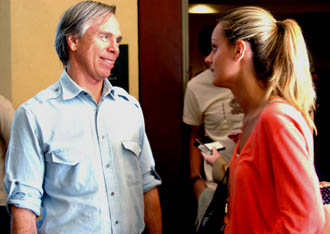 Tommy Hilfiger chats with Suzanne Anderson, a senior majoring in management in the A. B. Freeman School of Business, during his recent visit to the school.

“I was looking at other designer brands and I didn't want [mine] to be sullen and dark and unhappy and too cool for anyone,” Hilfiger said. “I wanted to create a brand that stood for positive feelings.”

After a long period of growth for his label, Hilfiger hit another pothole in the late '90s when his trademark baggy jeans and oversized logos which had been embraced by hip-hop stylemakers such as Snoop Doggfell out of favor with consumers.

“It's very easy to get pulled into a trend,” Hilfiger said when asked if he regretted the mass merchandising of his brand. “When we were doing the big red, white and blue logos, the demand was big, so I filled the demand. I overfilled the pipeline and our business came down a bit in the '90s. Any brand you see too much of, you don't want to wear anymore.”

Since then Hilfiger has worked to rebrand Tommy Hilfiger as a more upscale label along the lines of Calvin Klein and Ralph Lauren.

He told students the biggest obstacle in his career has been money. “I've run out of money so many times,” he said. “I had my first designs prepared to ship to Macy's and Bloomingdale's, but I couldn't afford the zippers. So I've had many obstacles and many challenges, but I've always found a way around them.

And how did he find his way around the zipper obstacle?

Mark Miester is the editor of Freeman magazine for the A.B. Freeman School of Business.