The deep-seated poverty in New Orleans exposed by Hurricane Katrina stunned outsiders. But the revelation of widespread deprivation wasn't such a surprise to locals. 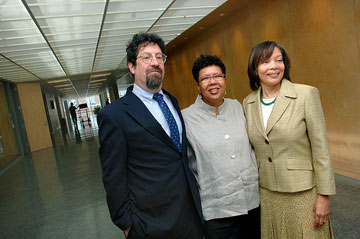 Joel Devine, (from left) Rebecca Chaisson and Verna Barnett lead the way for the Partnership for the Transformation of Urban Communities at Tulane, and, under its umbrella, the Institute for the Study of Race and Poverty. Devine is executive director and Barnett is a senior program coordinator for the units, while Chaisson is interim director of the institute. (Photo by Paula Burch-Celentano)

"The spotlight on poverty in New Orleans was a shock to others, but not to us who lived here before the storm," says Joel Devine, professor of sociology and now director of the Partnership for the Transformation of Urban Communities at Tulane.

The partnership and, under its umbrella, the Institute for the Study of Race and Poverty, were created within three months after the storm with funding from national foundations.

Both the foundations have "sensitivity to New Orleans and a perception of the necessity to address issues of race and inequity," says Devine. "They want to bring focus [on these issues] from the cauldron of Katrina."

The John D. and Catherine T. MacArthur Foundation gave a $200,000 planning grant for the partnership, and the Ford Foundation contributed $200,000 to create the institute and support a series of summits on issues tied to racial inequalities.

During this planning year, as the partnership defines its mission, Devine is discovering a need among the city's community organizations for research assistance, and he hopes to establish a viable community research center. Devine and the small staff of the partnership and institute are canvassing community groups to find out their research needs, which range from reference-type fact-finding to technical help and training in doing research to full-fledged program evaluation. Even faith-based groups, says Devine, need to know the results -- the quantifiable outcomes of their work -- not merely that they believe what they are doing is good.

The Institute for the Study of Race and Poverty, led by interim director Rebecca Chaisson, also is reaching out to community agencies and activists to promote networking and dialogue. The institute's first summit on "structural racism" was held in March. Summits on the new multiculturalism of New Orleans and public education -- a joint venture with the Scott S. Cowen Institute for Public Education Initiatives are scheduled later this year.

The challenge ahead, says Chaisson, "is to translate what we learn into action." Chaisson is also an assistant professor of social work. In addition to the foundation grants, a "critical node" of the partnership is the urban studies minor, approved by the faculty in early March. As part of the new minor -- with plans to eventually expand it into a major -- are several new urban studies courses.

The first to be offered is "Urban Geography: Case Study of New Orleans," to be taught in fall 2007 by Richard Campanella, associate director of the Center for Bioenvironmental Research at Tulane and Xavier Universities and author of Geographies of New Orleans. A coordinate major in social work policy and practice also is offered.

The focus of the partnership as it moves forward is not solely on New Orleans, says Devine. "We can learn from others. They can learn from us." Racism and poverty are operative in many places, he says. "The part has to be understood in terms of the whole."

Comparative studies of urban issues -- from contemporary and historical, local and global perspectives -- can lead to the creation of public policy that fosters sustainable health and well-being. "The heart of the matter is a level playing field," adds Devine. The idea of equity is not to produce level outcomes, but to provide level opportunity.