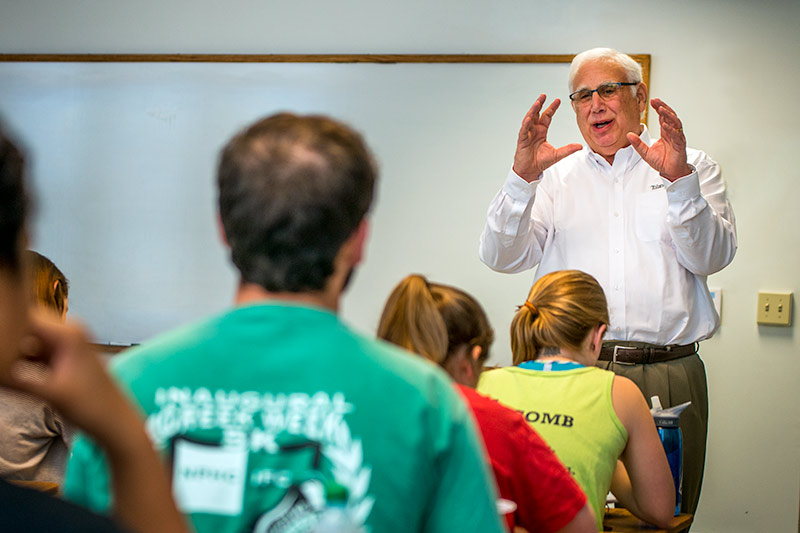 Enrichment seminars with President Emeritus Scott Cowen will be a highlight of the Cowen Scholars program. (Photo by Ryan Rivet)

Twenty-nine undergraduate and graduate students make up the first group of Cowen Scholars for the 2016–17 academic year. The program, a fund of endowed scholarships, recognizes President Scott Cowen’s leadership, passion and service to Tulane and to the New Orleans community, and espouses his values and principles.

Lead gifts from Jill H. (NC ’85) and Avram A. Glazer, Louellen and Darryl (L ’72) Berger, and Valerie and Michael (A&S ’87) Corasaniti provided the basis for the scholarships; those families agreed to match follow-up gifts of $50,000 or $100,000 each from other donors. The scholarships support students meeting a variety of criteria.

“As a longtime volunteer at the university, I have a lot of respect and admiration for Scott and everything that he did for the university,” said Rusty Pickering (E ’91), who contributed to the fund.

“We knew that we wanted to endow a scholarship in honor of the scholarship I had been given.”

For Scott Sullivan (E ’87), good timing allowed him to give to the program. Sullivan, a reconstructive breast surgeon in New Orleans, wanted to create a biomedical engineering scholarship.

“I appreciated the renaissance of the engineering program after Katrina,” said Sullivan, who also serves as a speaker and mentor to Tulane biomedical engineering students. “The BME department is on the forefront of technology, and it’s an exciting part of science. I think the skills that these students can acquire from it will allow them an opportunity to make significant changes and contributions in society.”

Pickering, a former Deans’ Honor Scholar, says his own undergraduate scholarship “meant a tremendous amount to me, and it’s changed my life.” Now general counsel of a technology company in Atlanta, Pickering and his father wanted to build on their giving.

“We knew that we wanted to endow a scholarship in honor of the scholarship I had been given,” he said, adding that he recently spoke at a university scholarship event and met students and President Mike Fitts. “It was meaningful to me.”