Vietnamese Americans in New Orleans have quickly rebounded from Hurricane Katrina-associated traumas they may have experienced, a team of researchers from Tulane University and Dartmouth College has concluded. Cultural attributes of the Vietnamese American community such as resilience and mutual support have been crucial to their recovery, says Tulane doctoral student Lung Vu who conducted interviews. 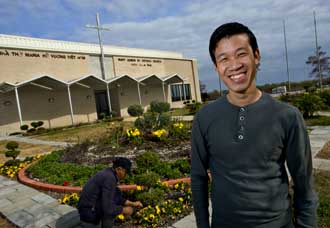 Lung Vu, a doctoral student in the Tulane School of Public Health and Tropical Medicine, is studying the resiliency of the Vietnamese American community in New Orleans after Hurricane Katrina. (Photo by Paula Burch-Celentano)

Just weeks before the storm, in June and July 2005, an earlier team interviewed a group of 125 Vietnamese Americans as part of a study assessing their adaptation to American society.

One area of interest was the degree of recovery from trauma caused by the Vietnam War and their subsequent displacement and stays in transition camps.

The fresh trauma inflicted on the same group by the hurricane led the Tulane team to seek out Fran Norris at Dartmouth, an expert in post-traumatic stress disorder, and plan a wave of follow-up interviews to be led by Vu, who is completing his dissertation in the Department of International Health and Development in the Tulane School of Public Health and Tropical Medicine, and his fellow Vietnamese graduate students at Tulane. Vu's advisor, Mark VanLandingham, Thomas C. Keller Professor of Diversity, leads the overall research effort.

The team used a questionnaire developed by the World Health Organization. “We determine if someone has PTSD by asking if they experience anxiety disorders or mental distress after a traumatic event, for example, Hurricane Katrina,” says Vu.

A key finding is that the Vietnamese, though badly affected by the storm (40 percent of those interviewed reported severe property losses and damage), have a strikingly low prevalence of PTSD compared to whites and blacks in the same area  5 percent compared to 30 percent for other groups.

“Many Vietnamese view Hurricane Katrina as much less consequential than their experiences during the war and as they migrated to America,” explains Vu. “During their flight, many lost family members. Many more lost their life savings. All of them lost their homes and communities. The hardships imposed by Katrina were of course substantial, but not nearly to the degree they had experienced before.

“I think there are also some cultural factors that helped them recover from Katrina. They built a very close community in New Orleans after coming here from Vietnam. After the hurricane, family members and neighbors helped each other quickly rebuild what had been damaged. Self-reliance, self-sufficiency and strong community support are typical characteristics of the Vietnamese, and may well have protected them from high levels of PTSD.”