She's arguably the most popular woman on the uptown campus, at least on the days when checks are cut. Yolanda Jackson greets every entrance into the accounting office with her trademark south Louisiana “whatcha got, baby?” Her calming voice is a welcomed reassurance for any staff member being pressured by a vendor. So since everyone knows her, how did her jewel of a voice go unknown by so many? 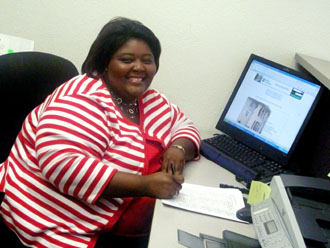 Yolanda Jackson has an award-winning voice for gospel music, but her many Tulane colleagues may not know it. She is a longtime clerk in the university's accounting office. (Photo by Alicia Duplessis)

This year, Jackson, or “the money lady” as her colleagues call her, is up for her second Louisiana Gospel Music Excellence Award (LGMEA).

Jackson received her first nomination after her album “Worship” was released in 2006 in conjunction with her church, Nineveh Baptist Church of Metairie, La. Later that year, she was invited to attend the Gospel Music Workshop of America (GMWA), in Monroe, La.

That invitation turned into one of the most significant moments in her career, she says, as her name quickly circulated the event and the leaders of the GMWA and the LGMEA chose her for a 2007 nomination. A new recording “My Testimony” is set for completion by the end of 2009.

Jackson began singing when she was only 3 years old. Her mother, a constant coach, first sought formal training for her when she was 7. Later, Jackson's skills flourished under the direction of her music teacher at Xavier Preparatory School, Germaine Bazzle, a local jazz artist in her own right.

Thinking back on those years, Jackson says, “She was mean but so good â¦ she would teach and sing with such dignity and style.”

At the age 14, when Jackson started singing with The Gospel Choralettes, she never dreamed that her talents would have her traveling around the world by the time she was old enough to vote. In 1988, while just a sophomore at Dillard University, she was on tour to Umbria, Italy. In 2000, she served as back-up singer in blues and jazz legend Davell Crawford's performance in Lisbon, Portugal.

On her third trip to Europe, she sang “Oh Happy Day” to an enthusiastic crowd on the Spanish Riviera in December 2007, “just in time to get them in the Christmas Spirit,” recalls Jackson.

Between trips abroad and with the disbanding of the Choralettes, Jackson began working with Hezekiah Brinson Jr., music director at Nineveh Baptist Church, and a group of soulful singers. Her album “Worship” was the first produced by the church.

Jackson's passion for music, specifically gospel and praise, has been reinforced over the years by events that would define her life. In 1985, she lost her grandmother  one of the first to cheer on her musical gifts. In 1997, a house fire left the family homeless but not hopeless, and the outpouring of love they received from the Tulane community gave Jackson strength to continue on. Tragedy struck again when her mother, the biggest advocate for Jackson's singing career, died in March 2004.

Through it all, Jackson says she feels a call to “carry on.” She adds, “No matter what you go through, what storm, what loss, what trials â¦ God's love carries us on.”

Bobbie Parker is a budget analyst in the Capital Projects and Real Estate Group at Tulane.