Chants of “Roll Wave Roll” rained down from the stands behind the Green Wave's bench during the Conference USA volleyball tournament in Memphis, Tenn., on Sunday (Nov. 23). Cheers from the reserves encouraged the team to push for points down the stretch. And with a thunderous kill by senior right-side hitter Bridget Wells, the Tulane University volleyball team won the 2008 C-USA conference tournament championship with a hard-fought, 3-2 victory over league rival the University of Alabamaâ“Birmingham. 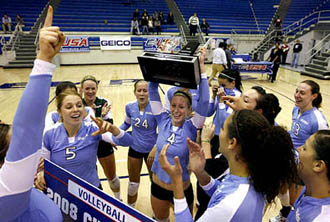 The Green Wave volleyball team celebrates its 2008 Conference USA tournament victory in Memphis, Tenn. The team defeated the University of Alabamaâ“Birmingham in five sets, 3-2, on Sunday (Nov. 23). The team set a school record with its 16th victory this year. (Photos by Joe Murphy)

After falling to UAB in the first set, 25-20, Tulane was on the cusp of the championship after taking the next two stanzas, 25-19 and 25-9. The Blazers stormed back in set No. 4 with a 25-20 victory to send the match to a fifth and deciding set. The Green Wave took an 8-4 advantage at the bench swap, and outscored the Blazers 7-2 the rest of the way to earn the league's automatic bid to the NCAA Tournament for the first time in school history.

Tulane will learn of its postseason destination on Sunday (Nov. 30), when the NCAA Selection Committee announces the NCAA Volleyball Tournament field at 9 p.m. on ESPNU.

“There really are not words to describe how I feel, how my assistants feel or how my players feel right now, because this has been a long time coming,” Tulane head volleyball coach Liz Kritza said. “This is the eventual outcome of what we committed to do four years ago.

“I could not be happier for a group of people who are so different in so many different ways to come together, focus on a common goal and do everything in their powers to achieve it.”

With the win, Tulane improves to 27-5 on the year and runs its winning streak to a school-record 16 straight.

Senior outside hitter Sara Radosevic was named C-USA Championship Most Valuable Player after posting a match-best 18 kills to go along with 15 digs, three block assists and a trio of service aces. Two of her aces came in the final four points to push the lead to 13-6, followed by senior middle blocker Jen Linder and freshman outside hitter Visnja Djurdjevic combining for a block to set up match point. Wells then put an exclamation point on the season so far with a kill down the line. 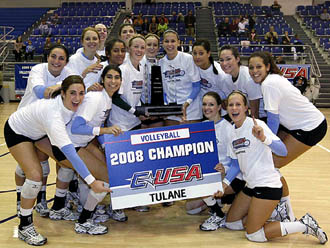 Radosevic said, “It was completely a 100 percent team effort. There is absolutely no one person who did this. Whenever we play for each other, this is what happens.”

Radosevic was one of four Tulane players to post double-digit kill totals in the match as Djurdjevic, Wells and junior right-side hitter Ksenija Vlaskovic tallied 15 apiece. Radosevic and Djurdjevic posted double-doubles with 15 and 13 digs, respectively, as did junior setter Rachel Lindelow, who had a team-best 30 assists to go with 11 digs. Junior libero Jenn Miller tied for team-high dig honors with 16 of her own and chipped in with a service ace.

“UAB has the firepower to be able to score at the same pace we do, point for point,” Kritza said. “Our secret to success had to be to take them out of system and slow their offense down. We had to stop them from scoring at such a high clip because we needed our offense to be an advantage for us.

“This is a very significant win for us because it is against UAB. I have the utmost respect for head coach Kerry Messersmith and the program she has built. This match today helps both of us prepare to go on to the NCAA Tournament and represent Conference USA the way that we should.”