Volleyball Team Keeps its Eye on the Ball

Volleyball season is winding down, but the Green Wave women's team and head coach Liz Kritza are still wound up. With a 22-5 record, Tulane has two regular-season matches left, the conference tournament ahead and a big goal still looming: securing a first-ever bid to the NCAA Tournament. 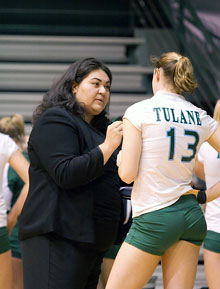 Kritza shrugs off the pressure by staying centered on the things that have brought the team this far and keeping her players in that same state of mind.

“You don't focus on the winning, you focus on the reasons why,” she said in an interview before leaving on a trip with the team to the University of Texas-El Paso for Friday's (Nov. 14) match. “You win matches in practice, in preparing to play. We stay focused on the things that got us to this point.”

And at this point, they are still making history for Tulane volleyball, with a share of the Conference USA regular season title wrapped up, the first title in the Tulane program's history.

Kritza's volleyball team has won 11 games in a row and 22 straight in Avron B. Fogelman Arena in the Devlin Fieldhouse. While the team is playing its best volleyball of the season, Kritza keeps pushing her players for continual self-improvement. “I want their best,” she says, “that's our key to success.”

Several of her players are at the top of their game. Earlier this season, senior outside hitter Sara Radosevic became the fifth player in Tulane history to post 1,000 digs and 1,000 kills in a career. Her teammate, junior libero Jenn Miller, set a school record with 1,369 digs.

Radosevic is one of four players from Central Europe who have made a contribution to the team's success. Recruited by assistant coach and 14-year professional player Sinisa Momic, Radosevic and senior Luna Rebrovic are from Zagreb, Croatia, while freshman Visnja Djurdjevic is from Zitiste, Serbia, and junior Ksenija Vlaskovic is from Pozarevac, Serbia.

Kritza and the team traveled to Croatia in May for a 14-day trip that included training and competing against teams from an area in the world rich in volleyball tradition. 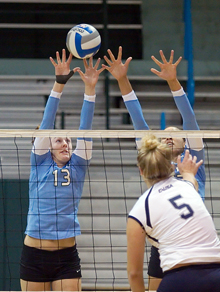 The hard work and long hours on the court all come down to the season-ending climax.

Kritza, who is an alumna of the Tulane volleyball program, added, “When I took over as head coach back in 2005, this is where I truly believed the Green Wave volleyball program should be  at the top of the conference and the region, and garnering national attention.”

The volleyball team will be one of four Green Wave sports teams in action this weekend (Nov. 14-16) and the athletics department is offering ticket specials to lure fans to the events.

Senior players will be honored by both the football and volleyball teams as they close out their seasons. The football team will play the University of Alabama-Birmingham at 2 p.m. on Saturday (Nov. 15) in the Louisiana Superdome, while volleyball will close out the season at 1 p.m. in Avron B. Fogelman Arena in the Devlin Fieldhouse on Sunday (Nov. 16) against the University of Texas-El Paso.

Special ticket packages have been put together for those fans wishing to attend the four events. A $40 ticket will gain Green Wave fans access to all four games and fans that present a ticket stub from any of the four games will also receive half-price tickets to the other three events.