After winning eight matches in a row and setting a school record with 18 straight victories in Avron B. Fogelman Arena in the Devlin Fieldhouse, the Tulane women's volleyball team heads out on a tough road trip against four Conference USA opponents. 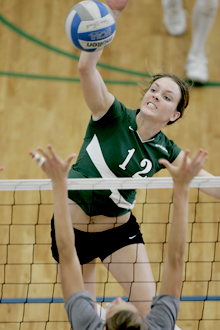 Green Wave sophomore Lindsey Shepard shows her defensive style at the net. She had two solo blocks and six block assists in the Tulane victory over Rice University on Sept. 28. (Photo by Tyler Kaufman)

Wins in Avron B. Fogelman Arena in the Devlin Fieldhouse over the University of Houston on Friday (Sept. 26) and Rice University on Sunday (Sept. 28) pushed the Wave's C-USA record to 2-0.

“This group seems to enjoy rewriting Tulane volleyball's history books,” head volleyball coach Liz Kritza said. “I'm not surprised. They take great pride in their success here in Avron B. Fogelman Arena in the Devlin Fieldhouse. I knew it was a significant victory for us, not just to get a win against a quality opponent, but to defend our home floor and keep that home-court win streak going.”

With last weekend's wins came another honor for Jenn Miller, the junior Tulane libero, who was named C-USA Defensive Player of the Week for the second week in a row. She tallied 17 digs in the 3-1 Rice game and 11 digs in the straight-sets win over the Houston Cougars.

Meanwhile, junior right-side hitter Ksenija Vlaskovic set a record in the Houston game, finishing the night with nine kills to push her career total to 1,001 and becoming just the 12th student-athlete in Tulane volleyball history to hit the 1,000-kill mark.

“I was really surprised, but it feels really good,” Vlaskovic said of hitting the kills benchmark. “We have all worked really hard, but it's a great feeling to get something that stands as a symbol of what we try to do here.”

Tulane's next home match is slated for Oct. 14, when the Green Wave play host to the University of New Orleans at 7 p.m. in Avron B. Fogelman Arena in the Devlin Fieldhouse. For ticket information for that match, as well as future Green Wave athletics events, contact the Tulane University Athletics Ticket Office at 504-861-WAVE.