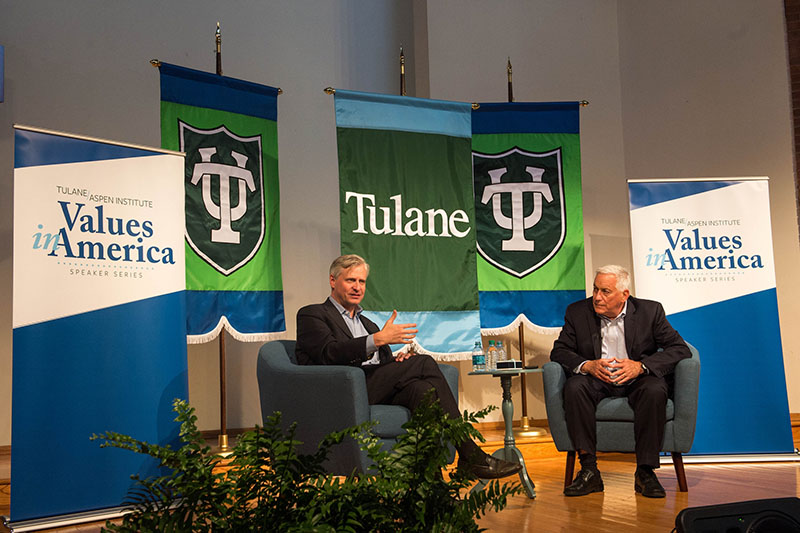 Presidential historian Jon Meacham, left, and Tulane professor Walter Isaacson, lead a discussion titled, “When America’s Values Are Tested: Lessons From Jefferson, Lincoln and Other Great Leaders in the Age of Trump” on Thursday, April 19, on the uptown campus. (Photo by Sally Asher)

During the discussion, “When America’s Values Are Tested: Lessons From Jefferson, Lincoln and Other Great Leaders in the Age of Trump,” various audience members chimed in, including political strategist James Carville.

Isaacson is president and CEO of the Aspen Institute and a former executive at both CNN and TIME. Meacham is a Pulitzer Prize winner and best-selling author of numerous books.

“I think there’s a mysterious moment where the habits and the dispositions of the leadership class intersect with all of us.”

Among the lessons put forth by the speakers was that it is often inaccurate to judge historical figures by the cultural and political standards of today.

Meacham and Isaacson emphasized the importance of individuals, however flawed, to the strength of our nation.

“I think there’s a mysterious moment where the habits and the dispositions of the leadership class intersect with all of us,” said Meacham. “And we spend a lot of time … talking about leadership; we don’t talk about followership as much. But a republic, in classical terms, is only as good as the sum of its parts.”

The discussion turned to the fact that many modern political issues, including debates related to taking down Confederate monuments and how to end gun violence, are divisive. But America has risen above divisions in the past, and is likely to do so again.

“We have a difficult, complex and not entirely happy history,” said Meacham. “And the remarkable thing is that we’ve done as well as we have. This is still the most durable and successful experiment in pluralistic republicanism in the history of the world.”

Part 2 of the series will take place this fall.