Tulane is looking for at least six students who are passionate about social entrepreneurship to apply to be a part of the Ashoka U Changemaker Campus, a new and highly selective program for universities by Ashoka, the world's largest association of social entrepreneurs. 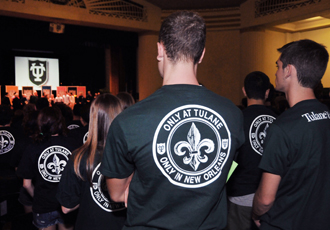 When the newest class of Tulane students arrived at the uptown campus on Saturday (Aug. 22), they received green T-shirts to wear when they engage in community service. (Photo by Sally Asher)

The organization chose Tulane as one of only five universities across the country to participate in the program, which brings together students, faculty and staff members to transform their university into a hub for social change.

Joining Tulane in this year's Changemaker Campus Consortium are Babson College, the University of Coloradoâ“Boulder, College of the Atlantic and the New School. They will join last year's group  Cornell, George Mason and Johns Hopkins universities and the University of Maryland  to share best practices and bridge the gap between theory and practice. The teams will meet throughout the year to organize events and programs that support social innovation and entrepreneurship on campus.

Both graduate and undergraduate students are eligible to apply, but applications are due by Sept. 7.

Tulane established the Social Entrepreneurship Initiatives office this summer to nurture and inspire social innovation across campus and beyond. Barksdale has several initiatives lined up, including the NewDay Social Entrepreneurship Challenge, a competition for $20,000 for business ventures by Tulane students whose primary goal is to effect social change in New Orleans.

She also is planning the NewDay Social Entrepreneurship Distinguished Speakers Series that will present prominent leaders from across the field of social entrepreneurship. So far, speakers will include Blake Mycoskie, founder of TOMS Shoes, Ashoka founder Bill Drayton and Darell Hammond, founder of KABOOM! Playgrounds.