Tulane baseball has added new talent and depth to its 2010 roster with the signing of several Louisiana and out-of-state ball players, including nine high school seniors and one junior college transfer, head coach Rick Jones announced. 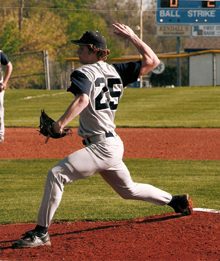 Gunner Wright will transfer to Tulane from Grayson County College in Denison, Texas. He is both a pitcher and position player. (Photos provided by Tulane athletics)

Three of the new players are from the New Orleans area. They are high school seniors Brennan Middleton of Baton Rouge, La., Brandon Boudreaux of Covington, La., and Garrett Cannizaro of Mandeville, La.

“This is one of the largest recruiting classes we've had since I became the head coach,” Jones said. “This was done out of design and out of necessity. We have 10 seniors [on this year's team] and a lot of draft-eligible kids on our roster. I have no doubt that these kids will have great success once we get them on campus.”

A strong two-way player, Wright is transferring from Grayson County College in Denison, Texas. He will get plenty of time on the mound and as a position player. The right-hander posted 12.04 strikeouts per nine innings as a freshman at Grayson, along with a .310 average that included 59 RBI.

McKenzie, from Braintree, Mass., is the lone high school pitcher in this signing class. He finished the 2008 season with a 6-1 record (1.10 ERA), recorded one save and struck out 100 batters in 46 innings.

Boudreaux comes to Tulane from St. Paul's High School in Covington, where he was a 7-5A All-District and All-St. Tammany Parish selection in 2007 and 2008. The outfielder finished the 2008 season with a .350 batting average. 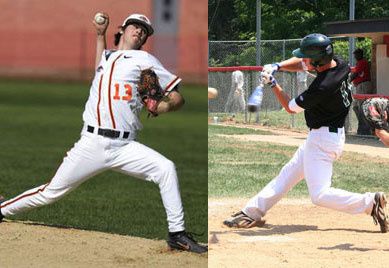 Planning to join Tulane are high school seniors Kyle McKenzie, left, and Brandon Boudreaux, right. McKenzie is a pitcher from Massachusetts and Boudreaux, from Covington, La., is a hot-hitting outfielder.

Hailing from Sugarland, Texas, Robinson was a 4A first team All-District and first team All-Area co-MVP in 2008. He led his team to the 2008 district championship and was named to the 4A All-State team after his club finished as 4A regional finalists.

Cannizaro, whose older brother, Andy, is in the Tulane Hall of Fame and played with the New York Yankees and the Tampa Bay Rays, is a three-year letterman at Mandeville High School. He finished his junior season hitting .390 with five home runs and 30 RBI, while being 5-0 as a pitcher with two saves and a 1.91 ERA.

Middleton was recognized as a 2009 Under Armor Pre-Season All-American. A middle infielder at Baton Rouge's Parkview Baptist High School, he was ranked the No. 4 prospect in Louisiana.

Georgia-native Crohan, a Gold Glove recipient his junior and sophomore years as a catcher, also received scholar-athlete honors. Woodson, an infielder, hit 33 RBI in the 2008 season and posted a .404 average at Vicksburg High School in Mississippi.

Barry is a middle infielder who was named to the all-county team during his sophomore and junior years in Nesconset, N.Y.

A dean's list student, Miller led his Connecticut high school to its first state championship game during his sophomore campaign. The same year, the right-hander hit .386, played error-free defense at third base and earned All-Conference honors.