For Green Wave basketball fans, November is the time to get out the green pom-poms and spirit sticks. Both Tulane men's and women's teams are getting ready for action, with the men's team up first at an exhibition game on Nov. 6 against St. Charles Avenue neighbor Loyola University. 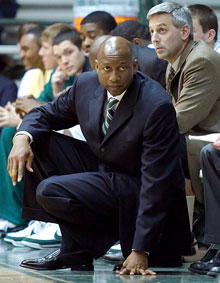 Dave Dickerson, in his fourth year as head coach for the men's team, has posted 34 victories in the last two years. (Photos by Dave Browning)

The women's team, meanwhile, opens play with an exhibition match on Nov. 8 against the Houston Jaguars.

The men's team, which has posted 34 victories during the past two years under fourth-year head coach Dave Dickerson, will play 15 contests in Avron B. Fogelman Arena in the Devlin Fieldhouse.

“With two back-to-back winning seasons under our belts, we hope to continue to improve and set our sights on postseason play,” Dickerson said. “As always, the great support from our students and fans will once again make Avron B. Fogelman Arena in the Devlin Fieldhouse one of the best home courts in the country.”

He acknowledges that the Wave will face a tough schedule this year. “This is the most difficult schedule we have played during my tenure at Tulane,” he said.

Tulane returns guard Kevin Sims, who Dickerson said is “one of the best guards in this conference,” as well as Robinson Louisme, the team's third-leading scorer last season.

While the Green Wave women's team has been picked to finish fifth in Conference USA, head coach Lisa Stockton's players will be in search of Tulane's fourth regular season title and fifth tournament title. Tulane will host the C-USA tournament at Avron B. Fogelman Arena in the Devlin Fieldhouse on March 5-8.

“I think it's going to be a really competitive conference race this year. I think any number of teams can win it,” Stockton said. 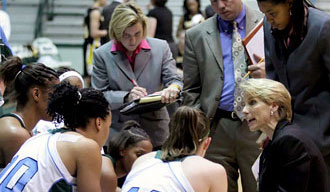 Lisa Stockton, kneeling at far right, head coach of the women's team, has the all-time record for wins in Conference USA.

The Green Wave return three starters and nine letter-winners from last year's team that went 16-14. The team sports one of the best point guards in the nation in junior Ashley Langford. She led Tulane last season in both assists and scoring, averaging 11.9 points per game to go with her 160 assists in 30 games.

The Green Wave open the regular season at home on Nov. 14 with a preseason WNIT tournament game in Fogelman against Illinois State University.