There hasn't been much time for a summer breather for Rick Jones, but the Tulane head baseball coach wouldn't have it any other way. 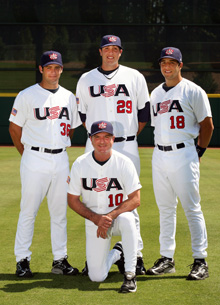 He spent much of the summer traveling internationally with 22 college all-stars as the coach of Team USA. Now he's focusing on the Tulane players who will soon hit campus for the fall semester. "I was on the phone with recruits this afternoon. It's time to frame a jersey and move on," Jones says.

The jersey he'll be framing isn't the traditional Tulane green  it's in patriotic colors representing Team USA. During June, Jones held trials for the national team, followed by games against teams from seven different countries.

Jones had been hoping for a chance to coach the USA college all-stars ever since he served as an assistant coach on the national team 19 years ago.

"It was great to represent Tulane and head our national team," he says. The winningest coach in Conference USA history who is entering his 17th season with Tulane, Jones and his Team USA players finished with a 19-5 record. A highlight was the trip to Japan for the USA vs. Japan Collegiate All-Star Championship, in which Jones' team and Japan tied with two games each until a nail-biting fifth game that Japan won, 8-7, in the 11th inning.

"The U.S. has never won that series in Japan in 37 years. We came the closest," Jones says.

Team USA ended the season on July 26, beating Germany 8-1 in the championship game at the World Baseball Challenge in Canada.

While three Green Wave players made Team USA, pitcher Nick Pepitone stayed with the team for all its games, notching 10 strikeouts and allowing just two hits and no runs in 14 innings pitched during eight game appearances.

"To have him do so well was really special," Jones says.