The Louisiana Superdome, home of Tulane football and one of the nation's premier athletics venues, will become Green Wave territory once again this fall as the season kicks off on Sept. 13 against East Carolina University, but Wave fans will be anticipating one season game in a different venue  outdoors and steps away from the oaks in City Park. 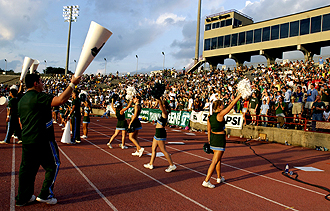 The Green Wave will take on Army in City Park's Tad Gormley Stadium on Oct. 4 for homecoming, while fans enjoy tailgating and celebrating around the stadium before the game. (Photo by Paula Burch-Celentano)

For the first time since 2004, the Tulane homecoming game on Oct. 4 will take place in the 1937-era Tad Gormley Stadium, back in service after enduring extensive flooding due to Hurricane Katrina.

Tulane will play Army in the homecoming contest at 2 p.m., one of five home games this season that will have an afternoon kickoff.

The return to Tad Gormley in October has long been anticipated by the Wave faithful, who have fond memories of the 2002â“2004 homecoming games and celebrations held there.

Count Charlotte Travieso in that number.

“For alumni and the rest of us  students, parents  it's a much more welcoming and collegiate atmosphere, by the oak trees, near the expanse of Roosevelt Mall,” says Travieso, director of the Tulane Office of Alumni Affairs.

As comfortable as it is at the Superdome, there's just something about a being outdoors at a college football game. She adds, “It's much more amenable to a unified celebration.” That will mean plenty of tailgating and socializing before the game against Army on Oct. 4. 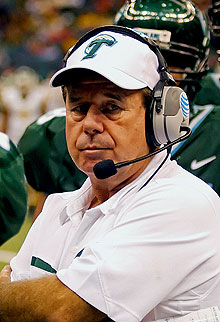 “Certainly some of our more festive and tradition-laden activities have centered around 'Homecoming in the Oaks' in years past,” says Rick Dickson, athletics director. “We are excited to bring this opportunity back for all of our students and alumni as well as our fans.”

The Wave will start the season on the road against the University of Alabama on Sept. 6.

The game against Southern Methodist University (Sept. 25) has been moved to a Thursday night nationally televised contest on CBS College Sports and will kick off at 7 p.m.

Tulane will play three of its first four home games on television.

The Green Wave's road game in Baton Rouge, La., at defending national champion Louisiana State University on Nov. 1 will air on a tape-delay basis on CST.