Football season is nearly five months away for the Green Wave, but preparations are already under way at the Westfeldt practice facility on the uptown campus, where spring drills began on Tuesday (March 31). 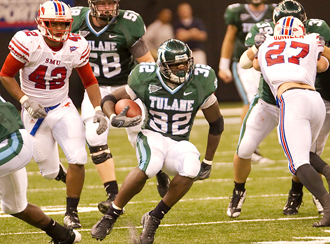 The 15-day practice schedule for head football coach Bob Toledo's team will conclude with the annual green-white scrimmage on Saturday, April 25, at 11 a.m. All practices, held from 9â“11:30 a.m. during the weekdays and at varied times on Saturdays, are open to the public.

Beginning the season with a three-game home stand, Tulane starts play on Friday, Sept. 4, with a league game against the University of Tulsa, the 2008 Conference USA runner-up, in front of a nationally televised audience on ESPN. Tulane will make another ESPN appearance the following week when Brigham Young University makes its first-ever trip to the Louisiana Superdome on Sept. 12.

Although New Orleans and Lake Charles, La., are about 200 miles apart, Tulane and McNeese State University will meet for the first time on the gridiron when the Cowboys visit the Superdome on Sept. 26.

After the opening home stand, Tulane plays the first of its two non-league road games when it journeys to Army on Oct. 3. 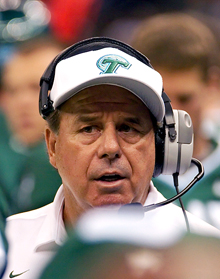 Following a two-year hiatus due to the C-USA schedule rotation, Tulane renews its series with the University of Marshall when the Thundering Herd makes its first-ever trip to New Orleans on Oct. 10. Tulane remains at home the following week when the Houston Cougars come to New Orleans for an Oct. 17 league match-up in the Superdome.

Following the Houston contest, Tulane must play five of its remaining six games on the road for the second-straight season beginning with Southern Miss on Oct. 24.

For the third time in the last four years, Tulane will make the short trek to Baton Rouge, La., on Halloween to face the Louisiana State University Tigers in the 98th edition of the storied rivalry. LSU is slated for consecutive appearances in New Orleans during the 2010 and 2011 seasons.

Tulane returns home on Nov. 7 to host the University of Texasâ“El Paso Miners in the final home game of the 2009 season.