For the second year in a row, Tulane faculty, staff and students are gearing up to assure the success of the LEGO League State Tournament. In this competition, teams of students ages 9 to 14 build robots out of modular LEGO pieces and program them to complete a series of challenges. 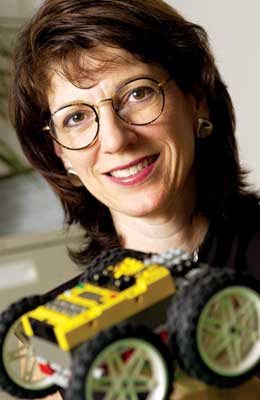 Teams from schools scout troops and home-schooled students throughout Louisiana and visiting teams from Mississippi will meet to demonstrate their creations this month. Tulane lends a hand with two levels of competition--the LEGO League competition for middle school students and the national FIRST (For Inspiration and Recognition of Science and Technology) Robotics Competition for high school students. For the LEGO League event, Tulane personnel volunteer as judges, referees, timekeepers and even serve as masters of ceremony for the tournament. Additionally, Tulane has provided both financial sponsorship and mentoring guidance to Lusher Middle School and the New Orleans Science and Math High School.

Coordinator of Tulane's LEGO League activities is Annette Oertling, an instructor and lab supervisor in the School of Engineering's Department of Mechanical Engineering. "These competitions get young people excited about science and technology," says Oertling. "Any exposure we can give them encourages them to consider the possibilities of pursuing a career in engineering." With guidance from high school teachers, industry volunteers and Tulane mentors, the teams confront the competition's robotics challenges, which change each year and are formulated by the FIRST organization. "The teams begin working in September when the objective of the competition is formally announced," says Oertling. "They then kick into high gear, working on their designs and building their robots."

Each team receives a standard, 700-piece LEGO Mindstorms robotics kit, which includes a programmable microcomputer, a variety of sensors, gear motors, and robotics design software. Each team uses these resources to devise their unique solutions to the competition's challenges. The students must build robots that can perform the required tasks on their own.

This year's theme is "No Limits," which is aimed at encouraging engineering solutions to problems of physical limitations. "The idea is to build a robot that could help someone achieve a task they otherwise wouldn't be able to accomplish," says Oertling. Teams undertake a series of nine missions that must be successfully completed by their robots. The instructions sound deceptively simple: put away a CD and play ball, for instance. One of the highlights of the tournament, according to Oertling, is watching the teams give their research presentations to a panel of judges. The presentations are creative, ranging from posters to PowerPoint presentations.

The winners of the state LEGO League tournaments are invited to demonstrate their robots at the national FIRST Robotics tournament for high school students. "LEGO League doesn't have a competition at the national level," says Oertling, who adds that an important aspect of the league is the emphasis on participation rather than winning. "In fact, points are awarded to teams who help other teams. It's quite common to see an exasperated team with broken parts being assisted by another team that has run over to help them out."

This team-building emphasis is mirrored in the rewards that LEGO League presents to teams for their participation. "There are awards for teamwork, for research presentations, for robot design and for enthusiasm and spirit," says Oertling. "And the trophies are wonderful, because they are made out of LEGOS."