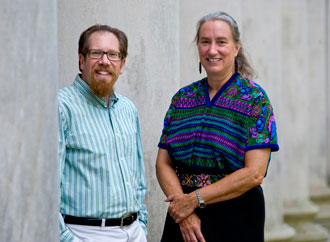 Justin Wolfe and Judith Maxwell are the newest recipients of Weiss Presidential Fellowships for excellence in undergraduate teaching. Wolfe, a historian, and Maxwell, an anthropologist, were honored at commencement on Saturday (May 16). (Photo by Paula Burch-Celentano)

Maxwell, a professor of anthropology, teaches linguistics courses in which she gives homework every night. “Learn by doing” is her motto in teaching a subject that is mathematical and highly structured yet full of infinite variety and nuance.

“We have been accused at times of killing the muse of language,” says Maxwell, “but I think the muse wants us to understand the structure so we can see the beauty and the symmetry of language.”

Linguistics is a wonderful field, says Maxwell. “You're constantly hearing people speak.” Language  the data of linguistics  is all around us.

She wants her students to become “aware of the way people create themselves every time they speak,” and she encourages her students to listen to language and express their understanding of what they hear to each other.

“It's an interesting kind of interaction,” Maxwell says, “because you would think because [linguistics] is so rule-governed and so formal that there would be little room for flexibility, but it seems that there are many different ways that the human mind gets its understanding of how the system works. Different words and different ways of expressing it can be that 'aha!' moment.”

Maxwell is an expert in the Kaqchikel language, a Mayan language spoken by indigenous people in Guatemala. She's written dictionaries and books on Kaqchikel, and for more than two decades has taught in Guatemala, through the Tulane Stone Center for Latin American Studies, a summer course on Kaqchikel.

Wolfe, associate professor of history, is interested, too, in how human beings create their world.

Wolfe is the author of The Everyday Nation-State: Community and Ethnicity in Nineteenth-Century Nicaragua (University of Nebraska Press, 2007). And he's writing another book on people of African descent in Nicaragua.

Although there are patterns in history, “that doesn't mean everything fits neatly into boxes,” he says.

People run into walls of class, race, gender, politics, economics and geography  and always have. Despite the constraints, people “weave immensely imaginative and creative ways of engaging with those walls or trying to ignore those walls or taking other paths,” says Wolfe.

Students in Wolfe's classes must read the literature, study the evidence and weigh contradictory arguments about the past. He teaches his students that history is complex because human beings are complex. “Humans are messy. The world is messy,” he says.

Wolfe adds that he isn't looking for one certain “right” answer from his students, but instead expects students to struggle with the evidence and work hard to convince him of the validity of their answers.

Maxwell and Wolfe were awarded Weiss Presidential Fellows medals at the Tulane commencement ceremony on Saturday (May 16). Weiss fellows also receive a cash prize of $5,000. The fellowship is a permanent designation. Honorees are nominated by students and then selected by a committee led by Tulane President Scott Cowen.