What we know about COVID-19 immunity 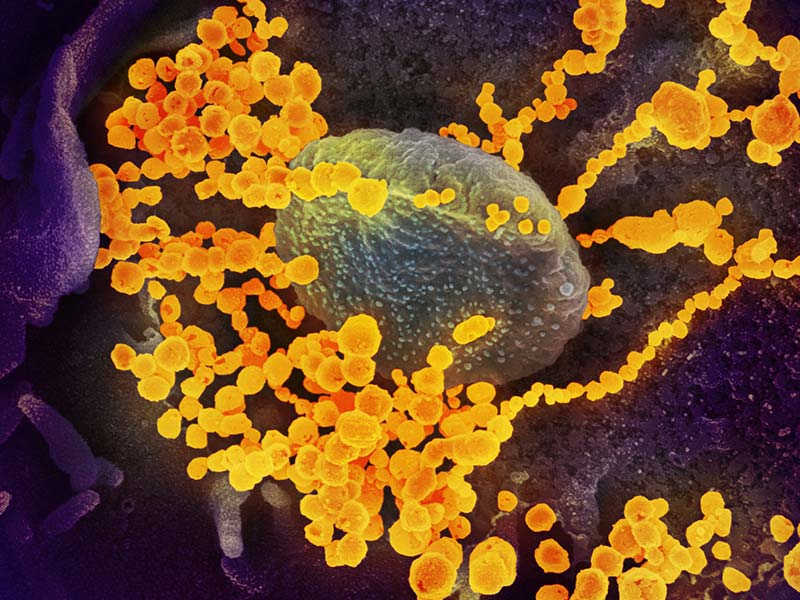 Electron microscope image of SARS-CoV-2 (round gold objects) emerging from the surface of cells cultured in the lab. Image courtesy of the National Institute of Allergy and Infectious Diseases.

Are people likely to catch COVID-19 twice? How long can immunity last? Why do some survivors develop antibodies from SARS-CoV-2 while others seemingly don’t?

These are just some of the questions scientists are still working to answer almost seven months into the global COVID-19 pandemic. Dr. Robert Garry, a virologist at Tulane School of Medicine, said antibodies should likely protect survivors for several months.

“Hopefully it will be longer than that. Hopefully, it'll be six months or even a couple of years,” said Garry, who is studying COVID-19 immunity and antibodies. “But right now, we just don't have enough information to say with confidence that a person who already had COVID-19 is not going to be infectious again and pass it on to other people.”

There have been at least three documented cases across the world where people have been diagnosed with the virus twice over several months. In these cases, however, the patients were infected with different strains of the virus.

Antibodies are just one aspect of an immune response against a virus. Other researchers are looking at whether exposure to the common cold, which is also a coronavirus, gives some residual immunity to COVID-19.

“T cells, like antibodies, very specifically recognize different pathogenic organisms (such as) viruses and bacteria,” said Tulane immunologist James McLachlan.  “And so there's some evidence that there are T cells in a lot of people circulating around that already recognize COVID-19 and are already primed to respond … so people are really interested in investigating whether or not that kind of pre-existing immunity based on getting the common cold is actually good at helping protect you against COVID-19.”

There have been more than 7 million documented cases of COVID-19 in the United States. Garry says that number is nowhere close to what could be considered herd immunity, when a high percentage of the population is immune to a virus either through a vaccine or prior exposure.

“The estimate is if we just let the virus go and fully open up the economy and let everyone go back to life as usual, we can achieve herd immunity, but it will cause at least a million deaths and as many as six million,” Garry said. “That's too big a price to pay for a short-term economic benefit.”

In the meantime, public health officials are pinning their hopes on a vaccine. Several leading vaccine candidates are in the final phase of clinical testing, but Garry doesn’t think any will be widely available by the end of the year.

“It’s going to be quite some time. We’ll know some things about the candidates over the coming months. I’m not sure the FDA will have enough information to approve by November or the first of the year,” Garry said. “People are working as fast as they can on this – getting a vaccine approved in the next couple of months, it could happen. But the next step of distributing it to the people who really need it, that will take many more months after that.”

Garry said that he agrees with Dr. Anthony Fauci’s assessment that “if we’re distributing vaccine to the folks that really need it by the middle of next year, we’ll be doing quite well.”

To hear more about COVID-19 vaccines and immunity, listen to On Good Authority, a new podcast from Tulane University.