If you're trying to lose your love handles this year, you may want to start by losing the white bread. 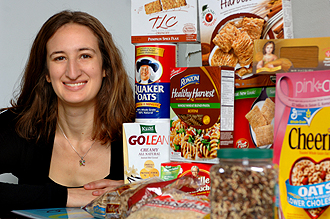 Heather Katcher, a dietetic intern in the School of Public Health and Tropical Medicine, says the skinny on whole grains is they're good for the heart and the abs. (Photo by Paula Burch-Celentano)

A low-calorie diet rich in whole grains like those found in oatmeal, whole wheat bread and brown rice helps reduce abdominal fat and lowers levels of a protein linked to heart disease, according to a study led by Heather

Katcher, a dietetic intern in the Tulane School of Public Health and Tropical Medicine.

The study, which was the foundation of Katcher's PhD thesis in nutrition at Pennsylvania State University, was published in the January issue of the American Journal Clinical Nutrition.

They split the men and women participating in the study into two groups on a reduced-calorie diet with five daily servings of fruits and vegetables, three servings of low-fat dairy products and two servings of lean meat. One group could get the daily recommended servings of grains strictly from whole grains and the other only from refined grains such as white bread, pasta and rice.

After 12 weeks, both groups lost an average of eight to 10 pounds overall, but the whole grain group lost a greater amount of fat in their waistlines. “We were really surprised by it,” says Katcher, who envisioned the study primarily to gauge heart health rather than weight loss.

The whole grain group also saw a 38 percent decrease in C-reactive protein, which is linked to increased risk of cardiovascular disease. The level of that protein remained flat for the refined grain group. Other studies have shown that whole-grain foods are heart-healthy because they contain cardioprotective compounds like dietary fiber, trace minerals, phtyoestrogens and antioxidants.

Katcher, who is at Tulane this academic year for a dietetic internship to become a registered dietitian, says that those who don't have metabolic syndrome can take lessons from the research.

She advises those looking to follow the diet to seek out foods with whole grains as their first ingredient. Avoid those with high amounts of sugar or those with enriched wheat flour, which is another name for white flour. And for those with visions of eating their way to abs of steel, don't kid yourself.

“It's not a magic food,” she says. “People shouldn't blow it out of proportion and run out and just eat whole grains all day. It needs to be along with other things to help them lose weight, like regular physical activity, eating smaller portion sizes and less fried foods, and eating more fruits and vegetables.”