Good news for dieters with a guilty conscience. It's not entirely your fault that you ate yourself into an extra pant size (or two) this holiday season, according to Dr. Tom Farley, chair of the Tulane Community Health Sciences Department. 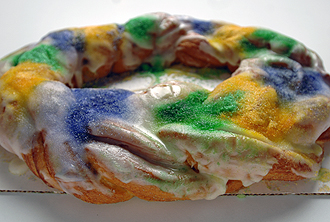 The temptation of a king cake in the office may prevent would-be dieters from losing weight, says Dr. Tom Farley, chair of community health sciences in the Tulane School of Public Health and Tropical Medicine. (Photo by Paula Burch-Celentano)

The true villains? The vending machines with chips and soft drinks down the hall, cookies from coworkers and the office king cake.

It's the high-calorie food within easy reach that's causing most to gain weight because people eat unconsciously, without thinking, according to Farley, principal investigator of the Prevention Research Center in the Tulane School of Public Health and Tropical Medicine.

Farley and Dr. Deborah Cohen of the Rand Corp. published "Eating as an Automatic Behavior" in the January issue of Preventing Chronic Disease, a journal of the Centers for Disease Control and Prevention.

The study argues that eating is an automatic behavior over which the environment has more control than the individual.

Case in point: How many times have you plopped in front of the TV and eaten a whole bag of chips when you weren't hungry?

"It's soon gone and you have no idea what you're doing," Farley says. "That's the basic problem. If it's within reach, you really can't control yourself."

Eating is so tempting, we'll even eat bad food just because it's there. Farley cites one study where people were given two-week-old, stale popcorn at a movie. "People complained about it, but nonetheless, the more they were given, the more they ate," he says.

If eating is an automatic response and willpower fails, the easiest way to successfully control our diets is to control the food around us, Farley says. For individuals, that means making food decisions at the grocery store. Don't buy junk food, sodas and high-fat foods and you won't have them on hand to eat at home. Avoid storing snacks in your desk at work.

Farley takes it a step further, saying that employers should also limit the amount of junk food available in the workplace. That means getting rid of snack and soda machines at work and restricting food to designated areas such as a cafeteria. Farley admits banishing junk food at work might be a tough sell at first.

"I'm convinced that if we got it out [of the workplace] and people saw that they were gaining less weight, people would be quite happy and wouldn't miss it," Farley says.